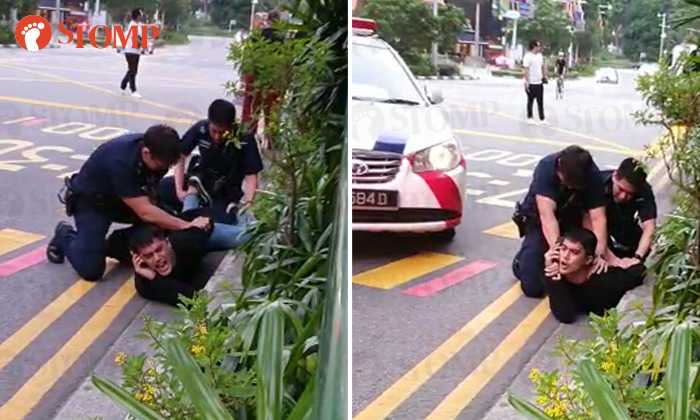 The 28-year-old Singaporean faced theft charges earlier in September this year, and also made headlines over his divorce from singer Bella Astillah and purported romantic scandals.

Now, Aliff seems to have run afoul of the law again.

Several Stompers alerted Stomp to videos circulating online, in which he is seen resisting arrest along Orchard Road on Sunday morning (Nov 10).

In one of the videos, Aliff, whose face is clearly seen, can be heard shouting on the phone as police officers attempt to subdue him.

He appears to be calling his father for help and struggling as the officers pin him down and try to handcuff him.

More police officers are then seen arriving at the scene in patrol cars.

In response to a Stomp query, the police said that officers on patrol had come across two men arguing along Orchard Road at about 6.40am.

"Despite the officers' repeated warnings to keep the peace, one of them, a 28-year-old man who reeked of alcohol, refused to comply and continued to create further annoyance to the public," said a police spokesman.

The man was subsequently arrested for causing annoyance to the public when drunk under the Liquor Control Act.

The spokesman told Stomp: "The man had resisted and put up a violent struggle when police officers were making the arrest."