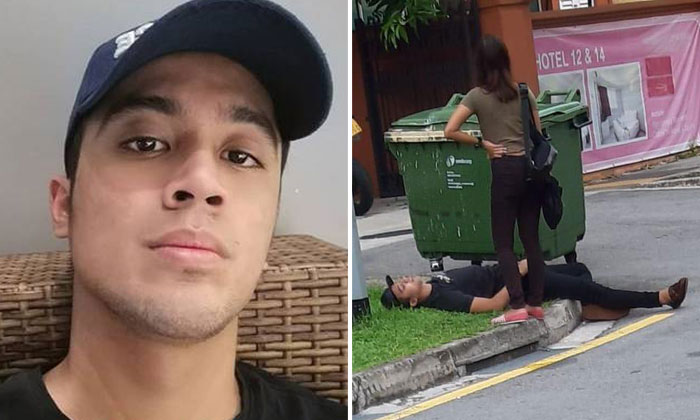 The 28-year-old star poured his heart out on popular Malay podcast OKLETSGO hosted by Dzar Ismail, Raja RaZie and Dyn Norahim in an episode posted on Tuesday (June 25).

The interview comes after a spate of recent controversies including being accused by Indonesian actress and politician Raja Yunika Putri of stealing her money and media circulating online of him where he is seen lying sprawled out on the ground in public.

Although he does not address the accusation of theft, he admitted that it was indeed him in the viral videos and photos.

"After my divorce, I felt like I lost my direction in life drastically," he said.

A court granted a divorce to Bella on May 16 after she cited differences between the two and added: "My husband always cheats on me."

Expressing regret for his actions, Aliff said: "I'm a human being, everyone makes mistakes.

"I've paid my dues for my mistakes and I'm here to share what I've been going through.

"When I was still married, there were days I thought about all the things I could do if I were still single.

"I thought to myself it would be better if I didn't have a wife then I wouldn't have to explain myself.

"What you say is a prayer.

"As they say, be careful what you wish for or you just might get it... and when you get it, it might not be exactly how you want it to be.

"At the end of the day, look at where I am now.

He added that he cannot bear to even look at himself in the mirror when he wakes up every morning.

He explained that after his divorce, he became rebellious because he could not accept that he had lost everything due to his own mistakes.

"My mind and heart were not in sync," he said.

"When I saw the video of me circulating online, I cried for a week straight.

"People told me I deserved it but people can say what they want to say.

"If it happened to someone you know then you would understand."

One of the hosts told Aliff that when he first saw the videos, he felt Aliff appeared to be unstable and stressed.

"In that video, I was not in a stable state of mind," Aliff said

He said that he was with a friend, A, who was supposed to be looking out for him.

"He spiked my drink and my female friend was almost spiked as well.

"What did he have to gain from spiking my drink and taking these videos of me?

"I haven't gotten any answers yet because this guy has gone missing-in-action.

"I'm to be blamed because I was in the wrong place but all I can say is that whatever happened in those videos, I was not sober."

Aliff did not reveal the details of the incident such as where and when it happened or what his so-called friend had spiked his drink with.

He also did not address the 'tattoos' on his body, including his ex-wife's name on his chest.

A VICTIM OF BULLYING

Aliff acknowledged that he has had a good life and career up to now.

"God gave me everything, bro," he said.

After being the first winner of Malay reality singing competition Anugerah in 2007, Aliff was propelled onto a path of fame and fortune with recording deals and acting gigs.

"I'm a person who never learns."

When asked if he was too young, at the age of 16, to be thrust into the limelight, Aliff agreed.

He revealed that he had been bullied for 10 years from when he was in primary school until he was serving his national service.

"With the trauma of being a victim of bullies, I became very rebellious," he said.

"The moment you break out from that shell, you feel like you want to get revenge.

"On top of that, I became a singer.

"I got all of the fame and all of a sudden, the girls who didn't know you existed wanted to get to know you.

"People will be friends with you for the wrong reasons.

"It gets to your head, especially when money comes into the picture.

"You become a totally different person because you wanted to become that person before."

Aliff revealed that he is now working to "make ends meet".

A few weeks ago he was working as a service crew in a hotel at Orchard Road. However, he was fired after the videos and photos went viral.

When asked about his finances, Aliff said he was in charge of money before the divorce.

"I spent a lot of my money on my family but the rest of it I spent on things I shouldn't have been spending on."

He did not specify what those things were.

He wants to get back into entertainment but has no leads yet.

In the meantime, he works to keep himself occupied so he does not do "anything wrong" and studies what he needs to.

"I really missed the life I was blessed with," he said.

"I had a beautiful wife, who was loyal and would do anything for me.

"I am blessed with a very handsome and smart young boy, Ayden Adrean, who is two years old and stays with his mum.

"From the age of 16 to two years ago, when I was 26, how many controversies have I had?

"I was never grateful.

"If I could turn back the hands of time, I would have done things differently."

Aliff said he appreciates the comments he's been getting from netizens, despite the hate and judgement he has received.

"Why do you put the burden of being a role model on our (entertainers) shoulders?" he asked.

"It's not fair for us. I did not sign up for that.

"I signed up for my passion for singing and acting."

Aliff told the podcast's hosts that he hopes to move on from what he has been through.

"My first step is to ask for forgiveness from my mum and dad," he said. He added that he did not spend Hari Raya with his family this year.

"I think the only time I made them proud was when I won Anugerah in 2007."

Listen to the full interview on Spotify.