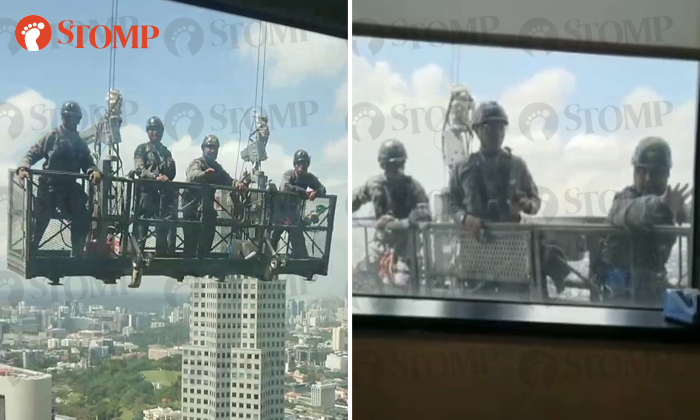 The Republic Plaza (RP) Building Management has issued a statement regarding the incident.

Four men stood on a gondola as it brought them towards the external facade of Republic Plaza on the 58th floor -- and hung on for dear life as it slammed into a glass window.

Besides the cleaners, equally terrified were Stomper April and Stomper Freida, as they watched the scene unfold in front of their eyes.

The incident occurred last Wednesday (Jan 9), at around 2.30pm.

The Stompers, who work on the 58th floor of the building, contributed three video clips showing the cleaners standing on the gondola, outside the window.

In one video, the cleaners can be seen holding on to the railings of the gondola as it hit the window's glass panel. At least one man also reached out his hand to steady himself.

The other two videos show the gondola elevating the cleaners further up the building, where according to April, the same thing continued to happen.

Stomp understands that Republic Plaza has 65 storeys, including the roof.

April told Stomp: "These brave men mustered a smile despite being clearly petrified each time the gondola slammed into the building.

"I don't think this is normal.

"It was scary watching this."

In response to a Stomp query, the Ministry of Manpower (MOM) said in a statement: "MOM has suspended all cleaning works on the building’s facade and is investigating the incident.”