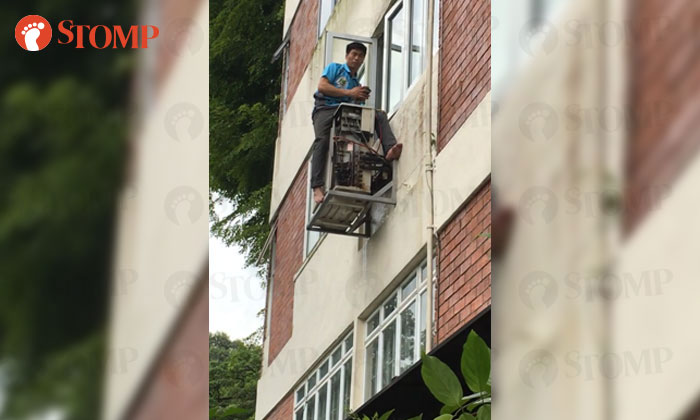 Stomper Sibel was concerned when she saw a man sitting on an air conditioner compressor on the third storey of Pandan Valley Condo along Ulu Pandan Road on Tuesday (June 12) at about 4pm.

The Stomper on her way to visit a friend who stays at the condominium but stopped to take a closer look when she noticed that the man was not wearing any safety harness.

"He was without a safety harness or travel restraint on the air con compressor ledge outside a third-storey unit," said Sibel.

"It looked like he was too big to be sitting on the compressor and I thought that it would give way at any moment.

"When I took out my phone to take a photo of him he reached into the unit and took out his own phone.

"I'm not sure if the man works for an air-con servicing company because I did not recognise any logos on his shirt."

According to Sibel, the man was there for about half an hour.

"Imagine if anybody was walking underneath him and the compressor gave way," she said.

"They would be killed."

In response to a Stomp query, a spokesman for the Ministry of Manpower (MOM) said: "MOM was notified of the incident on June 12 and is investigating."

Related Stories
Man goes the 'extra mile' to get work done -- and it's extra dangerous in the rain
Woman 'uses her life' to clean windows at Pasir Ris block
Cleaner on 4th storey ledge of Woodlands Horizon without safety equipment is accident waiting to happen
Woman balances on not 1 but 2 stools to clean windows at Buangkok condo
More About:
safety
dangerous