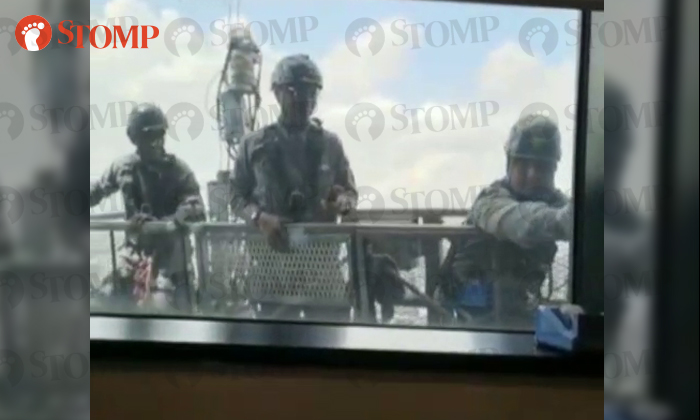 The management of Republic Plaza has issued a response regarding an incident where a gondola, which was carrying four workers, slammed into the external facade of the building.

Stomper April and Stomper Freida witnessed the incident on Jan 9, at around 2.30pm.

Videos previously published by Stomp show how the gondola swung into a glass window on the 58th floor as the workers held on tight.

In a statement on Tuesday (Jan 15), the Republic Plaza (RP) Building Management said it was aware of the incident.

A spokesperson told Stomp: "Four workers from our appointed cleaning contractor were in a gondola to clean RP’s external facade when unexpected strong winds caused the gondola to sway while ascending from level 50 to the rooftop.

"Due to weather conditions, this can occur from time to time.

"As workers’ safety is our top priority, upon notification, we stopped the external cleaning works.

"The gondola was certified safe to operate and the workers were also trained and certified to perform facade cleaning at height. In addition, the workers on the gondola were equipped with personal protective equipment."

No one was injured, said the spokesperson, who added: "The contractor has been doing regular facade cleaning at RP since early 2000s.

"We are working closely with the Ministry of Manpower to look into the matter and explore ways to further minimise swaying of the gondola due to unexpected changes in weather conditions.”