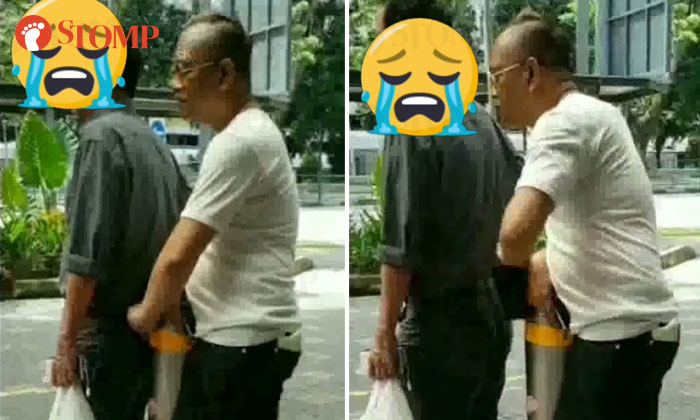 The man who took the wallet from the uncle's pocket has been arrested. Read the full story here.

A woman caught a guy pulling a wallet out of an older man's pocket at AMK Hub's taxi stand on Thursday afternoon (Feb 14).

Stomper Ayihtnas shared the video she took with Stomp.

"My colleague and I were waiting at the taxi stand when we noticed the man standing very close to the uncle," she said.

"We saw him attempt to take the wallet but fail so when he tried to again, we started recording.

"We didn't want to tell the uncle first because we wanted to catch the man in the act."

According to Ayihtnas, the man started walking away after getting the wallet.

"We immediately shouted at the uncle who went after the man and managed to get the wallet back."

The uncle, Stomper Tan, also reached out to Stomp to share what had happened.

"I think the man was hovering over my wallet while I was leaning against a bollard and waiting for me to stand up so that he could take my wallet out in a smooth motion without me noticing," he said.

"Luckily the women behind me saw what happened and alerted me to it.

"I shouted after the man and when I caught up with him I managed to get my wallet back.

Afterwards, Ayihtnas's colleague shared the video with Tan over WhatsApp. He subsequently made a police report.

"I just want to share this to warn others that this could happen to them.

"Before the incident, I actually noticed the man helping two aunties into a cab and thought he was so kind.

"This is a reminder not to always trust the kindness of strangers."

In response to a Stomp media query, the police confirmed that a report was lodged and investigations are ongoing.