Why so yao kwee? Woman helps herself to 'at least 480' ang pows from Teck Whye Lane temple 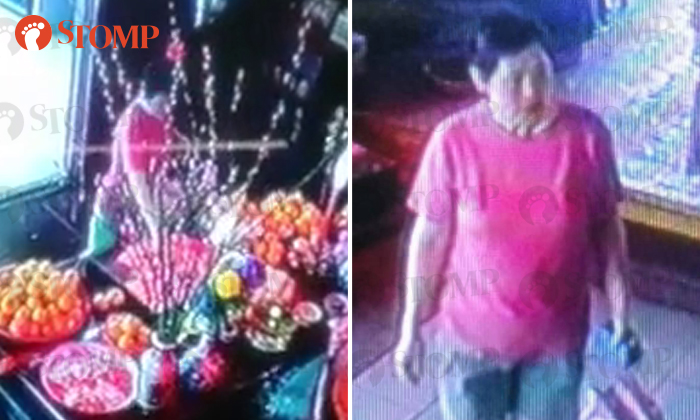 Take only what you need when offered freebies, people will say.

And for one auntie, what she needs appears to be over 400 red packets.

Stomper Eric shared CCTV footage showing how the woman had no qualms helping herself to red packets that were left on an altar in a temple at Teck Whye Lane.

Eric, who declined to reveal the temple's exact location, told Stomp that the incident occurred on Tuesday (Feb 5), at around 12pm.

The Stomper, who is a volunteer at the temple, said he would prepare red packets for temple visitors every Chinese New Year.

According to him, each red packet contains two 10-cent coins and a lucky 4D number.

The red packets are then left on a wooden tray on the altar, which is located inside the temple.

"They are meant as a blessing for members of the public who come to worship the gods," said Eric.

"On Monday night, I prepared 500 red packets and placed them on the tray."

However, when volunteers arrived at the temple the following day to tidy up the place like always, they noticed that the tray was completely empty.

Eric added: "They informed me and I immediately investigated by checking the CCTV."

That was when Eric saw how a woman had swept up the entire haul of red packets for herself.

Eric told Stomp: "You can see how the woman in red walked in and out of the temple multiple times.

"In five or six goes, she took all the red packets and placed them in the bag that she was holding.

"Based on my estimation, she took at least 480 red packets."

There were no volunteers in the temple at the time of the incident, said Eric, who did not make a police report.

He added: "Technically, she did not commit a crime as the red packets were meant for temple visitors. However, I hope to create awareness about the incident."

"We have had previous instances of people taking slightly more than they should and we would just talk to them nicely. But nobody has ever taken everything like this.

"I feel that this woman is selfish and greedy."