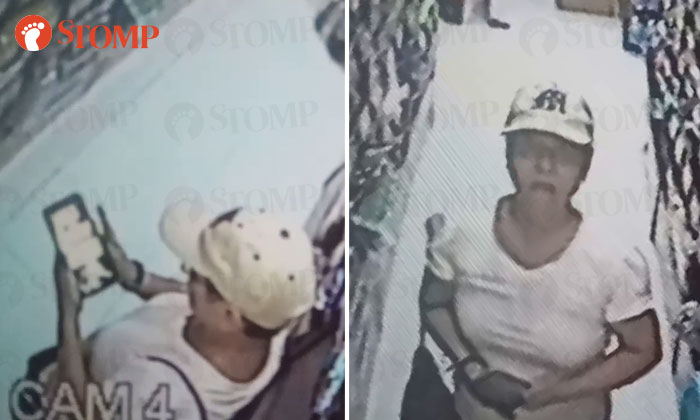 In response to a Stomp  media query the police said the 65-year-old woman has been arrested in relation to the case.

A woman was caught on video taking a mobile phone belonging to a female employee of a store at West Mall on Tuesday (Jan 22).

The employee's husband, Stomper Ghrame alerted Stomp to the incident and shared CCTV footage of the incident that he had retrieved from the management of the Value Shop.

He told Stomp that the woman in the video had taken his wife's Samsung Galaxy S8+ phone that was inside her locker in the store.

In the video, the woman is seen picking up the phone and trying to switch it on.

She looks at it's front and back before apparently trying to put it in her back pocket.

Unable to do so, she walks out of the store with the phone in her hand.

Ghrame and his wife promptly made a police report over the matter.

Fortunately, his wife had the Find My Mobile app installed in her phone that enabled them to lock out the woman and prevent her from using it.

"The woman does not know that the phone can be tracked," said Ghrame.

"It is still being traced to that location today (Jan 23)."

The Stomper added that he is offering a $200 reward for anyone who can help him find the woman so that he can retrieve his wife's phone.

If you have any information, kindly contact Stomp at stomp@stomp.com.sg or WhatsApp 9384 3761.