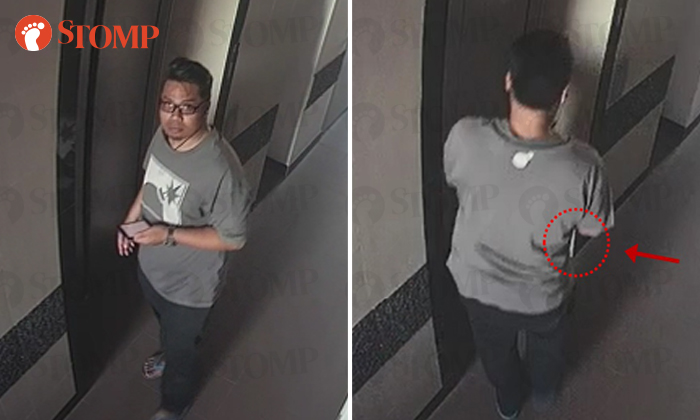 The Uber Eats deliveryman has apologised for his actions and compensated Stomper Binary0018.

Instead of leaving after finishing his delivery run, a man was caught on camera lingering in the corridor of a condominium along Dunearn Road and taking a resident's parcel instead.

The Dunearn Suites resident, Stomper binary0018, said she had been expecting a courier delivery from FedEx on Feb 19.

As she was not home, the courier called at around 6pm to inform her that he had left her parcel on her doorstep.

According to Binary0018, her parcel contained $343.31 worth of beauty products and toiletries.

She told Stomp on Feb 20: "I was okay with it as my condo is quite secure and rarely anyone ventures to my floor.

"I returned after work at nearly 8pm and there was no parcel on my doorstep. I immediately checked with my courier, who confirmed he had delivered it."

The resident then contacted her condo management and viewed CCTV footage showing what transpired.

She said: "We saw that about half an hour after my courier left my item, another guy came up to my floor. He was delivering something to my neighbour who stays on the same floor.

"The video showed saw him loitering in front of my door before surreptitiously picking up my parcel and going down the lift with it."

In the video, the man can be seen entering the lift and leaving with a white parcel tucked under his right arm at around 6.33pm.

Binary0018 believes that the guy is an Uber Eats deliveryman after making checks with her neighbour.

She continued: "My neighbour was able to provide me with details of her Uber Eats transaction, the delivery person's name and even a full-face profile photo of him (from the app) -- which matches the person captured in the CCTV."

Stomp has included screenshots provided by the Stomper in the gallery above.

The resident has since made a police report and contacted Uber Eats about what happened.

She added that her parcel was not see-through, though there was a folded invoice, so it is unclear if the man knew what items it contained.

A spokesman for Uber Eats told Stomp: "What has been described is unacceptable and violates our Community Guidelines.

"We are currently looking into this incident and stand ready to support the relevant authorities in their investigations."

Stomper Binary also said: "A team member from Uber Eats got in touch with me yesterday (Feb 21) for further discussion after Stomp contacted them."

Related Stories
Men take Adidas shoes from Woodlands resident -- but her CCTV does not make it 'Yeezy'
'Semi-masked' man returns $350 Adidas shoes and slippers to Telok Blangah resident after Stomp report
Cashier arrested after taking money from Bukit Merah store over 10 times in a day
More About:
theft
stealing
UberEATS