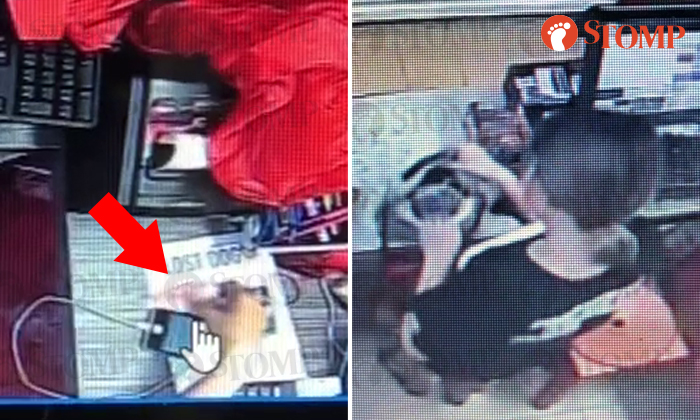 Instead of performing her duties diligently, a female employee was caught on camera taking money from a provision store that she worked at and keeping it for herself.

Stomper Eunice, who owns the store at Block 109 Bukit Purmei Road with her husband, alerted Stomp to the incident.

The cashier allegedly committed the act multiple times during her shift on Jan 28, and was arrested on the same day.

According to Eunice, the cashier has been a friend of her husband's for over 10 years.

CCTV footage that Eunice shared with Stomp shows how the cashier collected payment from several customers, but did not place all the money inside the cash register.

Instead, she would leave some cash on the table, which she then kept in her own bag when no one else was around.

Eunice said: "When confronted, the cashier insisted that she did not take the money.

"However, after being asked a few more times, she said, 'You say I take then I take lo'.

"However, CCTV footage reveals that she took the money countless times, doing so in intervals of 10 to 20 minutes.

"These videos were taken on the same day and within a span of three hours. She did it over ten times in one day. There are more videos that I have yet to share."

The Stomper estimated losing hundreds of dollars, but said she has yet to calculate the exact amount due to how often the acts were committed.

She then called the police, who came down to the store.

In response to media queries by Stomp, the police confirmed that they were alerted to a case of criminal breach of trust at 109 Bukit Purmei Road at 11.41pm that day.

A 25-year-old woman was arrested in relation to the case.

Eunice added: "Even now after being released, she continues to deny stealing. However, everyone has eyes to see.

"She has known my husband for more than 10 years and yet she can still commit such an act.

"As the saying goes, you may know the person for a long time, but you may not know the true nature of the person."

Related Stories
Men take Adidas shoes from Woodlands resident -- but her CCTV does not make it 'Yeezy'
Woman diverts employee's attention at The Arcade store -- then takes dress and places it in big bag
Woman takes PS4 games at Hougang Mall -- but only pays up after video of her gets posted on FB
More About:
theft
thief
stealing
arrest