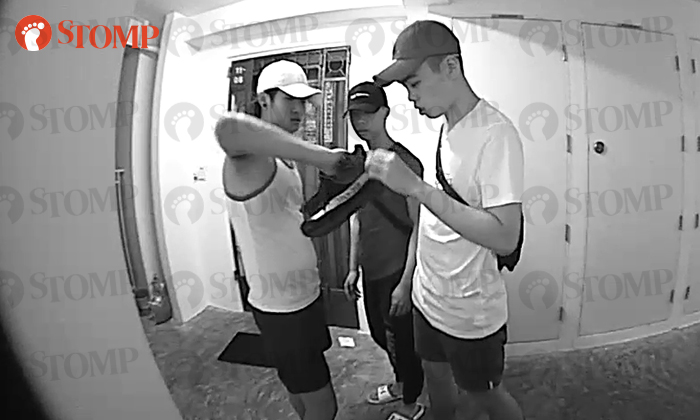 Three young men took two pairs of Adidas shoes that were outside a residential unit at Woodlands Drive 70, taking their own sweet time to inspect the loot and displaying various antics in the process.

However, what they did not know was that the resident, Stomper WJ, had an advanced CCTV system installed outside her flat, at the door bell.

WJ said she discovered on Jan 5 that two pairs of shoes and a shoe rack were missing from outside her flat at Block 717A.

Upon replaying CCTV footage, she realised that "three males, aged between 18 to 22, had been at the scene "at 2.30am to 3am on Jan 4" and taken her shoes.

Said the Stomper: "They were caught in clear view loitering along the corridor compound at Woodlands Drive 70.

"One man was on the lookout while the other two searched for something to take.

"Unfortunately for them, I had a video doorbell installed. It is unlike those ordinary cameras installed at the top corner of the unit.

"The men were wearing caps to evade those normal cameras at the top of the unit, but this time round was different."

WJ, who has made a police report, would like to tell the three men: "You can hide and run to create an insecure neighbourhood, but your luck has run out and you can't fool technology. I hope this video will make you remorseful."

She added: "Before committing their act, the first guy (in a tank top) still acted some stunt.

"On his second attempt, he actually reached his hand into my unit compound to take the second pair of shoes."

View WJ's captioned photos in the gallery above and watch the CCTV footage below.