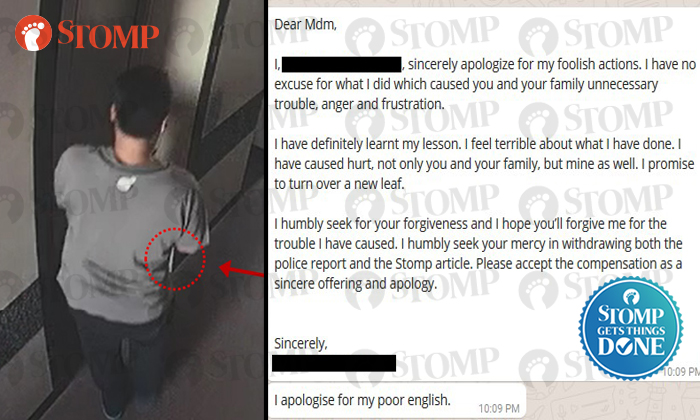 After seeing a video of himself on Stomp, the Uber Eats deliveryman who stole a condo resident's parcel has contacted the website to express his remorse and apologise for his actions.

He has also paid Stomper Binary0018 a compensation of $350, which is more than the full value of the parcel's contents, as well as written a heartfelt apology addressed to her.

The incident, which occurred at Dunearn Suites on Feb 19, was first reported by Stomp, after Binary0018 contributed CCTV footage showing the deliveryman loitering along her corridor.

The video also showed him taking the Stomper's parcel, which a FedEx courier had delivered and left on her doorstep, and then leaving with it tucked under his arm.

Binary0018 told Stomp that the parcel contained $343.31 worth of beauty products such as perfume and toiletries.

Shortly after an article and a video of the incident was published yesterday (Feb 22), the Uber Eats deliveryman contacted Stomp to identify himself.

He admitted that he was the man in the video and asked to contact Stomper Binary0018 personally so that he could make amends.

"I would like to sincerely apologise and return back the things. I really feel remorseful and I hope we can settle this privately, If possible, I would not want this to escalate to the authorities," he told Stomp.

Asked if he saw the CCTV camera when he committed the act, the deliveryman confessed that he did.

He said in a phone interview with Stomp: "I don't know what I was thinking.

"I saw the parcel and I just took it.

"I have never done this before."

However, when contacted by Stomp, Binary0018 said she did not want the contents of the parcel back due to the nature of the items.

She said: "I'm afraid is not possible for me to accept back the items. Obviously, the box would have already been opened and the contents inside handled (perhaps even tested/used).

"Some of these items were actually meant to be given as presents. And these are ladies' personal care/grooming items. Given their nature, you can understand why it's not nice to take them back.

"I may consider withdrawing the police report if restitution of the full value of these items is made."

The Uber Eats deliveryman and Binary0018 both agreed that he would pay her the full amount of $343.31 via bank transfer.

Stomp, who received screenshots of the transaction, understands that the deliveryman transferred a sum of $350 to Binary0018, almost $7 more than the agreed amount.

Binary0018, who will be going down to the police station to withdraw her report, added: "I'm grateful for the Stomp Team's help. Thank you very much!"

The Uber Eats deliveryman told Stomp that his account on the platform has been "temporarily banned".

He also wrote an apology letter which he shared with Stomp and asked that we helped pass it on to Binary0018.

Here in the letter in full: 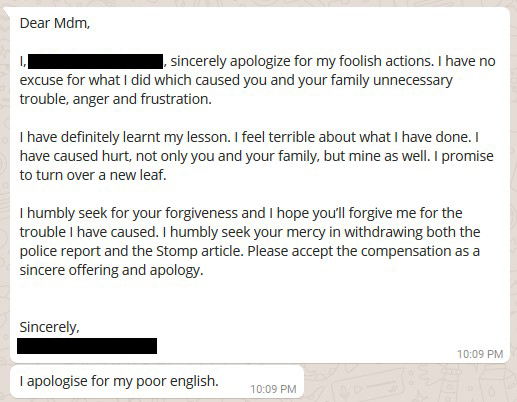 I, (name withheld by Stomp), sincerely apologize for my foolish actions. I have no excuse for what I did which caused you and your family unnecessary trouble, anger and frustration.

I have definitely learnt my lesson. I feel terrible about what I have done. I have caused hurt, not only you and your family, but mine as well. I promise to turn over a new leaf.

I humbly seek for your forgiveness and I hope you’ll forgive me for the trouble I have caused. I humbly seek your mercy in withdrawing both the police report and the Stomp article. Please accept the compensation as a sincere offering and apology.