Teens who sampled drinks, put them back on supermarket shelf during Covid-19 outbreak get probation 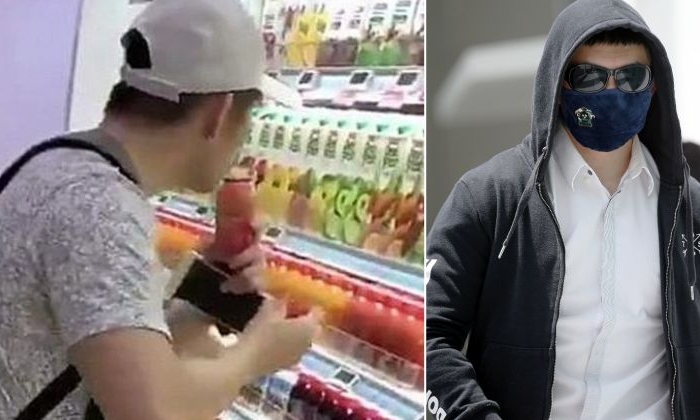 Two teenagers linked to a drink sampling incident in a supermarket amid the Covid-19 outbreak were each sentenced to probation on Thursday (Aug 27).

Nigel Pang Yew Ming, 18, and his 17-year-old friend each pleaded guilty on July 16 to one count of being a public nuisance.

Both teens were sentenced to nine months' probation and their parents were bonded for $5,000 to ensure their good behaviour.

The pair have to perform 60 hours of community service and must also remain indoors from 10pm to 6am every day.

The younger offender can no longer be named in news reports because of recent amendments to the Children and Young Persons Act, which now covers teenagers below 18 years old.

The two Singaporeans went to a FairPrice outlet in Bukit Batok West Avenue 7 at around 6.45pm on Feb 6 and Pang took two bottles of fruit juice from a refrigerated shelf.

He sampled both drinks before replacing them back on the shelf.

The 17-year-old boy recorded his friend's antics and the video was posted on Instagram, via an Instastory, with the caption "How to spread Wuhan virus".

Wuhan is a Chinese city that was the epicentre of the Covid-19 outbreak at the time.

In an earlier statement, the police said an acquaintance recorded a copy of the video and circulated it online.

The police added that this caused public alarm and concern.

Pang also knew that the friend would caption the video "How to spread Wuhan virus" and post it on Instagram.

Pang told him to highlight the fact that he had paid for the bottles of juice.

The friend posted this information in a subsequent Instastory instead.

The DPP had earlier told the court that the video gained traction on social media, with many members of the public expressing annoyance with the teenagers' antics.

A 21-year-old woman who came across the clip alerted the police on Feb 8.

For being a public nuisance, an offender can be jailed for up to three months and fined up to $2,000.