SMRT station manager gave $100 to single dad who was short of cash: "His story greatly touched me" 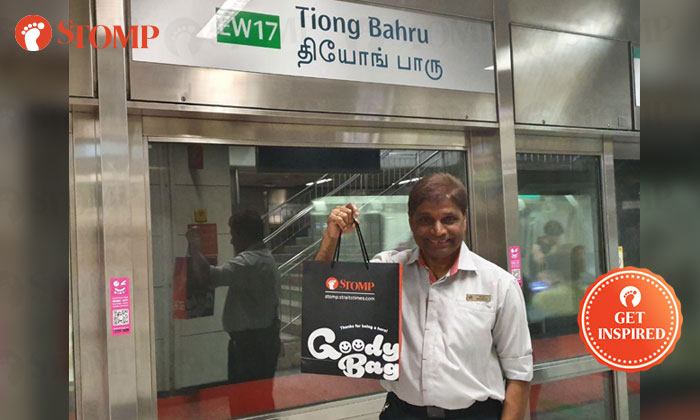 When people are going through a hard time, sometimes all they need is someone to empathise and offer sincere advice.

Stomper Caleb shared with Stomp how touched he was by SMRT station manager Mr Mohan who went above and beyond by offering encouragement and helping him on his journey when he found himself short of cash at Tiong Bahru MRT Station on Nov 20.

"I was sending my two sons to school when I was short of cash for travel," said Caleb, a single father who had unfortunately lost his job recently.

"I approached the station control centre for some assistance and Mr Mohan attended to me."

"Mr Mohan shared with me that he was the father of several grown-up children and showed a very empathetic side.

"He broke down the passenger-staff barrier, stripped off his uniform (metaphorically), and shared his journey of fatherhood with me.

"He told me religion and skin colour doesn't matter and that life is simply too short so we have to be kind to one another.

"He also related how he sees the beauty of cross-ethnic marriages, sharing how his son is marrying a Chinese lady.

"He shared that the struggling journey of a father will be met with greater and more rewarding things in life that are yet to be seen.

"Perseverance and encouragement were what he left me with."

Before parting ways, Mr Mohan went to the staff room and returned with $100 cash from his own wallet to give to Caleb as a blessing.

"He told me he wanted me to have it.

"I am not sharing this just for his generosity but also for being such an exceptional character.

"What a wonderful man indeed. Count your lucky stars, SMRT, you have a gem!"

After Caleb shared his story with Stomp, we reached out to SMRT to talk to Mr Mohan, 68, and give him a Stomp Goody Bag for his generosity and kindness.

He told Stomp he was surprised that Caleb had shared his encounter with Stomp.

"His story greatly touched me, even now I get emotional thinking about it," said Mr Mohan, his eyes brimming with tears.

"I told him to just hang in there and not to worry, things will turn around.

"He has done a fine job taking care of his two kids every day."

Having worked at SMRT for the past 26 years, Mr Mohan said this is not the first time he has encountered someone going through a hard time.

"When my job allows, I try to take time to talk to those who need it.

"It's always important to make time."

When commended for his kindness, Mr Mohan humbly shook his head and said anyone would have done the same.

"This is not my story, it is the philosophy that anybody who was in my situation would have done something for him, maybe in a different way, but if you had heard him and seen him, you would have wanted to help him too.

"I can bet that my team members would have as well, this I know.

"I have a lot of trust in humanity."

Related Stories
SGH housekeeper who helped carry elderly man down overhead bridge gets Stomp Goody Bag
Silvercab driver who picked up litter gets Stomp Goody Bag: 'Some people laugh at me'
Beatty Sec angel who aided 91-year-old woman: 'Nothing is a barrier if you want to help someone'
More About:
inspiring
kind
SMRT
good service
Stomp Goody Bag