Beatty Sec angel who aided 91-year-old woman: 'Nothing is a barrier if you want to help someone' 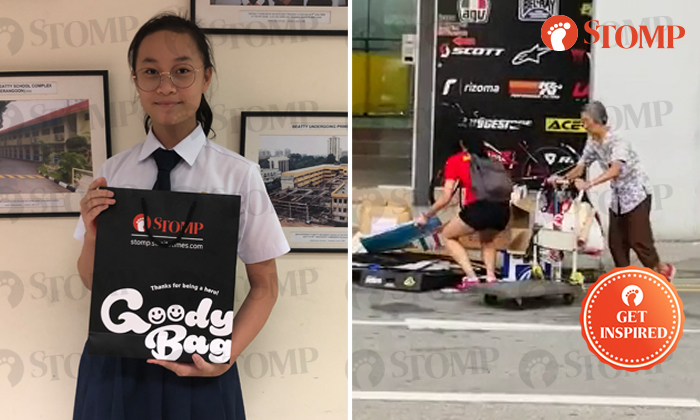 Helping someone should come from the heart and you should go all out to do it regardless of any barriers faced along the way.

That is the mindset 14-year-old Erlene Ang Kai Yi had when she helped an elderly woman with her heap of cardboard along Kelantan Lane on March 18.

In an earlier report on March 20, Stomper Raymond shared how he had seen the Beatty Secondary School student in action at around 7.15pm while on the way to dinner.

When he returned 30 minutes later, the girl was still there. By then, the sky had already turned dark.

Raymond, along with many netizens, praised the girl's heartwarming deed.

In an interview with Stomp on Monday (March 25), Erlene recounted how she was on the way home after her wushu class in school when she came across the woman, who is reportedly 91 years old.

Despite a language barrier with the Teochew-speaking woman, Erlene spent around 30 minutes helping her to sort out her carton boxes.

The shy and humble Secondary 2 student was not aware that Raymond was filming her.

Nor did she expect to be awarded with a Stomp Goody Bag or publicly lauded by her school.

She told Stomp: "I didn't do it to get people to know about what I did.

"If you want to help someone, just go all out to help them."

Even though Erlene does not understand or speak Teochew, she was unwilling to leave the elderly woman to her own devices.

"Language is not a barrier when you want to help someone," added Erlene.

Mr Ling Khoon Chow, principal of Beatty Secondary School, told Stomp: "We are extremely proud of Erlene for going the extra mile and rendering assistance to an elderly woman.

"She has certainly lived up to our school value of Care, by contributing actively and selflessly to a member of the community in need.

"We hope that her example will be a motivation and inspiration to other students and Singaporeans that small deeds and actions can make a difference to the lives of others."