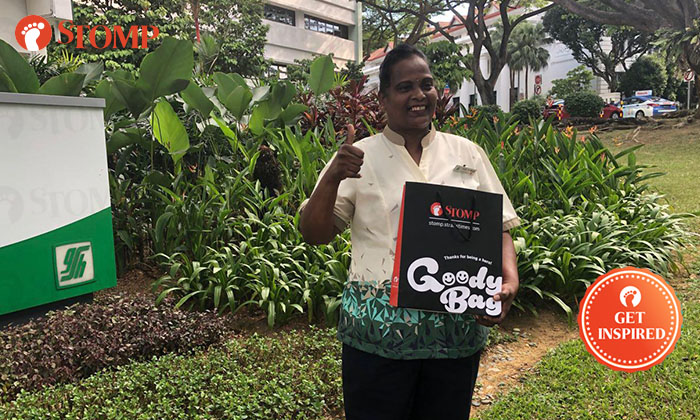 52-year-old Madam Isvari A/P N Veloo is a housekeeper from Singapore General Hospital (SGH) and has recently been in the spotlight for helping an elderly man who was stranded on an overhead bridge for about three hours.

The man's son, Jonathan Lee, shared about the incident on SGH's Facebook page.

Lee mentioned that his father lost strength in his legs and was thus left stranded on the overhead bridge.

Many netizens have commended Mdm Veloo for a job well done.

In an interview with Stomp on Friday (July 11), Mdm Veloo shared: "I was crossing the overhead bridge to buy my medication.

"When I came back the same way, I saw the man still there.

"There were people who walked past and asked him questions but no one really helped, so I personally went forward to ask the man's daughter: 'Why didn't you call the ambulance?'

"She replied that her father didn't want her to."

Mdm Veloo then brought the man's daughter to buy a chair for him to sit on, which was later used to carry him down the bridge.

Since Mdm Veloo was able to converse in Mandarin and Malay, it made helping the elderly man easier.

When asked what moved her to help the man, Mdm Veloo said in Malay: "I don't pay mind to who it is that needs help and I don't look at one's race, I just wanted to help.

"He reminded me of my mother, who's old like him, so it made me want to help him more."

She told Stomp in Mandarin: "When I was little, I lived in a kampung where everyone was Chinese.

"Everyone was Chinese and they spoke to us in Mandarin, so that's how I picked up the language."

Mdm Veloo shared with Stomp that she was really happy after finding out her act as widely circulated online.

For the last 16 years, Mdm Veloo's role as a housekeeper with SGH has been to perform cleaning duties and assist in reporting ward and common area's defects.

She told Stomp: "I love working here because when I see the doctors, nurses and everyone else, it makes me happy.

"While working here, I feel like we are one family. In the morning when I come in for work, they are my family. Then when I get home, I have my own family."

Mdm Veloo was over the moon when she received a Stomp Goody Bag.

She told Stomp: "I hope everyone can be like me - go forward and help whenever they see someone who looks unwell."

Related Stories
SGH employee praised for helping elderly man who was stranded on overhead bridge for 3 hours
Stomper praises 3 SMRT bus captains for taking care of her sickly father whose tumour had ruptured
Silvercab driver who picked up litter gets Stomp Goody Bag: 'Some people laugh at me'
More About:
get inspired
Stomp Goody Bag
inspiring
kudos
heartwarming
kind
SGH