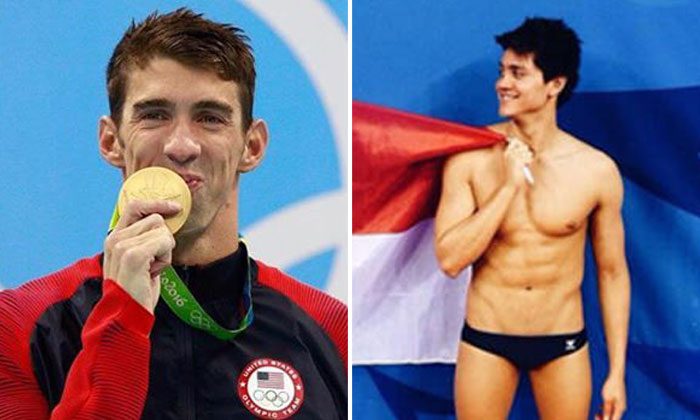 "When you want to be the best, you've got to believe you're the best," said Singapore's Olympic champion Joseph Schooling.

It's a simple thought but one that gets him through his races.

Just before he hits the water, he told AsiaOne at a press conference held at the Singapore Sports Hub today (Aug 16), that it's all about confidence. "I like to think that 'I can beat everyone'. It might sound cocky but it's the kind of mindset you've got to adopt when you start racing," said Schooling.

He said believing you're the best is "the first step to achieving your goals. You got to believe. I tell myself 'everyone's got to chase me down, no way you're going to beat me, you're kidding me'. It's got to be a little cocky but that's fine, it's good for racing."

During his epic 100m butterfly stroke Olympic race on Aug 13 Singapore time, Joseph said he had looked once at US' Michael Phelps and South Africa's Chad le Clos in the last 20 to 25m of the race and saw that he was ahead.

From then on, he said he looked straight down and focused on finishing.

"I didn't think much about technique or my stoke count, and all that stuff. At that point it's all racing, race to the wall, and thankfully I touched first."

He did have a moment where he thought he lost it all. He said he had set himself up well when he started the race right up to when he made his turn.

"Unfortunately I was a little long at the turn and I thought I lost it all there. I thought 'Oh gosh, you all are going to come back on me'. I thought I just lost all my speed."

"But thankfully I had a good push off", and as they say, the rest is history.

Constantly being compared to 23-gold medalist Olympic star Michael Phelps, Joseph said he does not want to fill Michael's shoes.

From a young age, Joseph had the dream to be an Olympic champion.

To be a champion, other than mindset, the everyday regime counts for a lot.

Joseph told the media at the press conference that a typical Monday, which is one of three heavy days he has in a week, during normal season, starts with practice from 6am to 7.30am. Then he runs over to the cafe for a quick bite to eat, then it's to classes where he has two or three everyday.

Classes run from 9am to 12.30pm and then he runs straight to the athletic dining hall for a quick bite for no more than 20 to 30 minutes. This is because he has to be at the weight room from 1pm to 2.45pm.

Then he stretches a little bit and would power walk all the way to the pool. "Maybe a seven to 10-minute walk. I walk slow. I can't walk (laughter from the media). Ya, swimmers right?" jokes Joseph.

After that he practises swimming in the waters from 3pm to 5pm, walks back to the dining hall for a 30- to 40-minute dinner and then marches it off when he goes one level down for study hall. There he will get tutor sessions or work on problems he has in his classes and does this everyday from 6pm to 9pm.

He goes home to study some more till "maybe midnight if I have to cram something in", added Joseph, and does it all over again the next day.