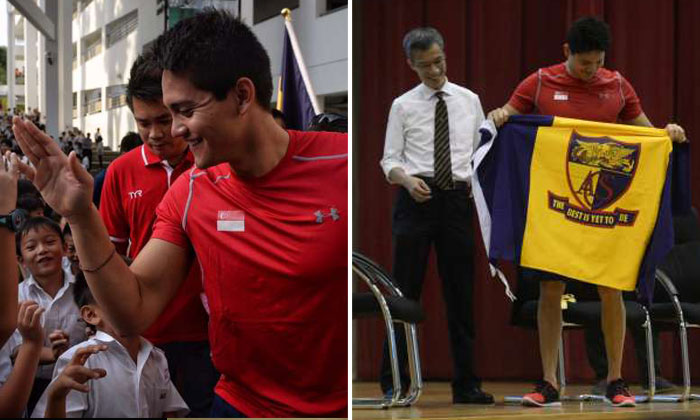 New Olympic champion Joseph Schooling is not content with just being one. He has already set his sights on breaking the world record in the 100m butterfly.

In an address to 1,607 students who were present at his alma mater Anglo-Chinese School (Junior) at Winstedt Road on Tuesday (Aug 16) morning, the Singaporean swimmer declared that he is gunning for his childhood idol Michael Phelps' world record of 49.82sec, set in 2009 while wearing a hydrodynamic supersuit that is now banned.

But he is not going to stop there after realising that dream.

In an address to the students, Schooling said: "That was my ultimate goal and my aspiration. On hindsight, right now, I thought I'd be content to be an Olympic champion and achieving my goal.

Schooling speaks to pupils on his dreams and aspirations

"But in reality, after my race, yes it was nice, it was crazy and everything was just nuts, but right now, I'm kind of looking forward to the next step.

"So my next step would be to try to be the world record holder in that event and breaking Michael's world record.

"What I realised was that you cannot sell yourself short. It's great to achieve your goals but you can't be content with achieving your goal for too long.

"You've got to take that, take the positives and got to move on. You've got to shoot for bigger and better things."

Schooling, who returned to Singapore on Monday (Aug 15), did not manage to get much sleep as he had to wake up early to get to visit the ACS (J) students.

He was a student at the school from 2002-2007 and then at Anglo-Chinese School (Independent) for two years before moving to the Bolles School in Florida in 2009 at the age of 14.

The homecoming of the ACS alumnus created a lot of buzz as pupils waited for his arrival as early as 7am.

Slightly before 8am, he arrived at the school accompanied by his mother May and was greeted by his former teachers before proceeding to the school hall for an assembly programme with Primary 3 to 6 pupils.

As the old boy entered the hall, the pupils gave him a rapturous reception, with chants of "Let's go Schooling!".

"Joseph was a model student as usual, not outstanding in being naughty, always obedient and doing his work spontaneously. He was friendly and got on well with all his peers," recalled Mrs Diana Chia who taught Schooling English when he was in Primary 2.

"I have an acidic tongue but I never really had to scold him. He didn't give us (the teachers) a lot of trouble, there were no major upheavals and he's a good boy."

When he was asked about the toughest training set he had done when he was in primary school, Schooling told his juniors: "We had to do 30 sets of 100 fly, but we ended up doing only 20, that was the hardest (set) I've done and I failed miserably."

"I fail more than I succeed," he added.

Primary 5 pupil Mirza Hameed, who is in the swim team, is motivated to excel in both studies and sport, said: "I'm inspired to work harder in swimming, and to score 98-100 points for Chinese spelling test."

Some students from the ACS fraternity, including ACS (I), ACS (Barker) and Anglo-Chinese Junior College also came to catch a glimpse of the star.

As a custom of the mission school, a prayer opened proceedings in the hall, before a question-and-answer session with the students.

To the envy of the crowd, two pupils had the chance to take a photo with Schooling on stage with his Olympic gold medal hung around their necks.

While his classmates later crowded around him in amazement, one of the pair, Barion Pang, a Primary 3 pupil, said excitedly while using his hands to cover his head: "Today was the best thing (day) ever."

The visit to his alma mater is another stop of Schooling's triumphant homecoming after his win in Rio.

He was formally congratulated in Parliament on Monday, capping off a whirlwind day which started with him being received by hundreds of adoring fans in Changi Airport, to receiving news that his national service deferment had been extended till after the 2020 Tokyo Olympics.