While you are checking out Joseph Schooling's biceps, take a moment to admire his cool new Olympic tattoo as well 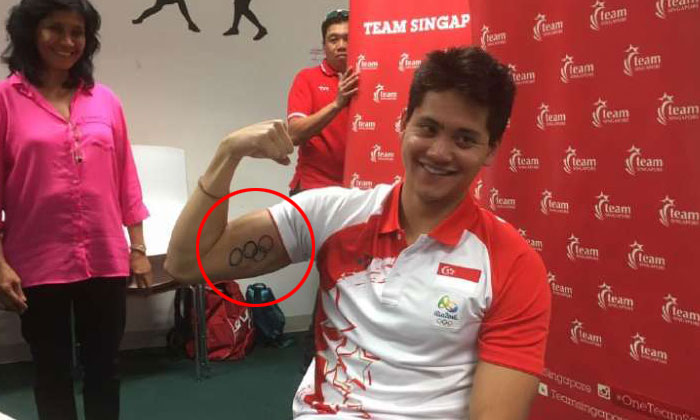 Besides an Olympic gold medal around his neck, swimmer Joseph Schooling now has another reminder of his memorable performance at Rio 2016.

The Singaporean has had the image of the five interlocking Olympic rings, which represents the world's continents, tattooed on his right arm.

The 21-year-old previously had the silhouette of the Longhorn, a reference to the University of Texas where he studies, tattooed on his shoulder.

Schooling showcased his Olympic mark publicly for the first time at a press conference at the Sports Hub's Black Box Auditorium on Tuesday (Aug 16).

During the 30-minute session, the youngster also talked about some quirky side effects of his newfound fame, including how his personal life has suddenly become fodder for the tabloid press.

He said: "My mum got really mad at me last night because I was apparently married to some girl - some news outlet in Hong Kong and New York had an article about me being married.

"I'm not married, I'm still trying to find out who this wife of mine is."

He also gave an insight into the punishing daily schedule that paved his road to the Olympics. His daily schedule in Texas sees him mixing multiple training sessions in the pool and gym with classes, extra tuition and other university activities.

A typical day, he said, starts with practice in the pool at 6am, and only ends after private study lessons around midnight.

But when he has time to play, he says: "I like to hang out with friends. Lately I've been getting on the poker grind with the guys, $10 a hand, nothing crazy."

He also plays computer games Call Of Duty or Halo, and goes paddleboarding as well as hunting or shooting with friends - "Texas, right?".