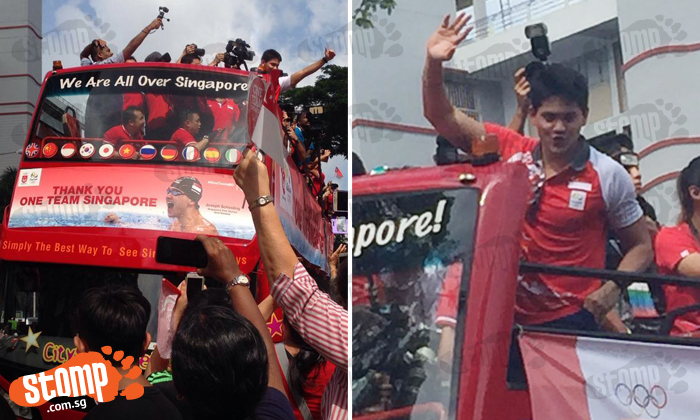 Huge crowds turned up in droves to catch a glimpse of Olympic gold medalist Joseph Schooling during his victory parade today (Aug 18).

Stompers Charlize, Marquose, Daniel, Donny Jacky, Daniel, Edros, Kay and Charles sent in photos of the scene via WhatsApp, showing Schooling on an open-top bus as members of the public greeted him.

Schooling's first stop was the Singapore Sports Hub, with the bus then making its way along Tanjong Rhu and Tanjong Katong Roads, Dunman High School and the Canadian School.

According to AsiaOne, there were reportedly queues at Marine Terrace Market at 8.30am as residents in the area hoped to meet the champion and get his autograph.

By 9am, crowds in the hundreds extended to nearby HDB blocks.

And when the bus arrived at Marine Terrace at 10.30am, hundreds of people mobbed Schooling as he was trying to make his way through the crowd to get to his favourite fried carrot cake stall.