Men chant his name, girls scream for him and one air stewardess even calls him handsome 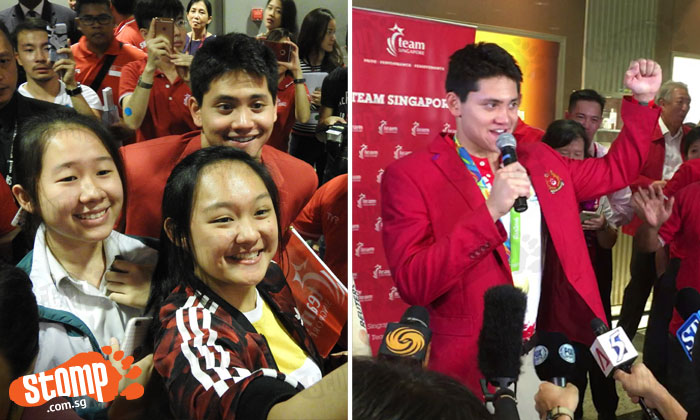 Girls in unifrom called out to him for selfies and autographs. Men shouted 'every day is Schooling day' at the top of their voices. A senior air stewardess was heard saying he was handsome.

These all took place at Changi Airport when most of you were asleep.

When the Stomp Team joined them at around 4.45am, a crowd had already formed outside the arrival hall.

Of the hundreds of fans present were students who wanted to catch a glimpse of Schooling before school as well as working adults who came before work.

Cheers of 'thank you Joseph' can already be heard even before the 21-year-old athlete made his appearance.

After Schooling finally emerged through the gates of the arrival hall, the crowd went into overdrive.

Screams and cheers filled the whole of Terminal 3. Schooling then made his way down the line of people who had come to see him.

Although he took only 50.39 seconds to complete his race, the 'king of the 100m butterfly' spent close to an hour signing autographs, taking selfies and interacting with fans.

Following the lively reception, Schooling then left the airport in a white convertible, possibly to get some chye tow kway before getting some well-needed rest.