When boy Schooling becomes a hero... 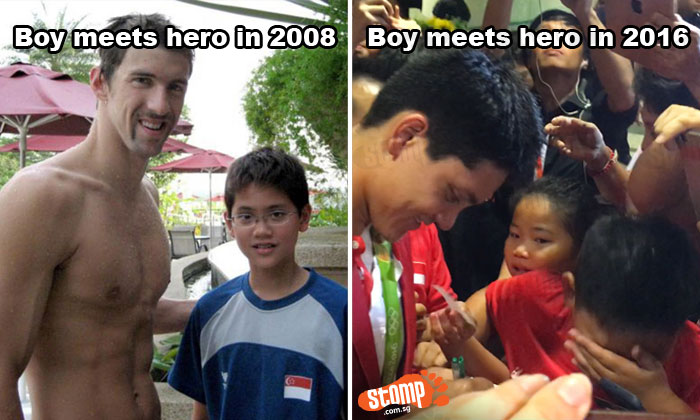 If you don't already know, there was a lot going on at Changi Airport this morning (Aug 15) as hundreds of people gathered to welcome Joseph Schooling home.

Of the many scenes the Stomp team witnessed at Terminal 3 when we joined eager supporters, one in particular stood out from the rest.

After coming through the gates of the arrival hall at around 6am, Schooling interacted with those who were present, taking selfies and signing autographs.

Upon seeing Schooling within touching distance, a young boy clad in a red-t-shirt suddenly began to cry.

He caught Schooling's attention, and the latter went up to comfort him. The swimmer then took a selfie with the young fan before signing him an autograph.

The boy was overcome with emotion after seeing his idol and began wiping his tears off his face. An official beside Joseph then patted the boy on the shoulder as a show of support.

Although brief, the scene was a heartwarming one. It is reminiscent of a photo Schooling took with his idol Michael Phelps eight years ago.

We are happy for the boy who managed to get up close with someone he looks up to. At the same time, kudos to Joseph Schooling for making the day a happy one for a young fan!

Related Stories
Men chant his name, girls scream for him and one air stewardess even calls him handsome
More About:
Joseph Schooling
olympics
heartwarming