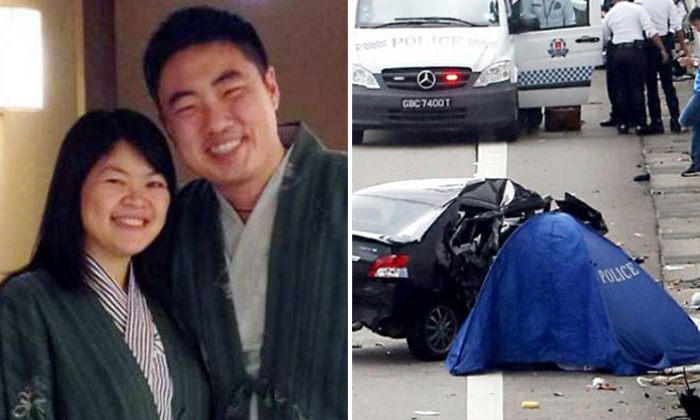 The wife of Mr Jackie Liong Kuo Hwa, 37, who was killed after a silver Mercedes-Benz slammed head-on into their car on Monday morning, was still trapped in the car when she made two phone calls to her siblings overseas for help.

Ms Venny Oliver, 37, first called her younger sister in Australia and later, her older brother in the United States, her 57-year-old cousin told Chinese-language newspaper Shin Min Daily News on Tuesday (Dec 20). Her sister then informed her parents about the accident.

The couple were travelling in a Toyota Vios towards Tuas when the Mercedez-Benz - which allegedly was travelling against the traffic flow - came ploughing into the car.

Mr Liong's car veered across three lanes and flipped sideways, trapping him in the driver's seat.

Mrs Liong was helpless as she watched her husband gradually lose consciousness, said her cousin. He added: "They were married for eight years and they were very loving. My cousin's husband would drive her every day to her office in Tuas. Even if she knocked off work late, he would wait to take her home."

Mr Liong, a television actor and event emcee, had to be extricated by the Singapore Civil Defence Force (SCDF) and was pronounced dead at the scene by paramedics.

On Tuesday, his 65-year-old mother told Shin Min that she was in Jakarta with her husband when she received a call from her in-laws saying that her son was "gone".

Mr Liong's 65-year-old father said that he hopes to find out how the accident could have happened so that the family can have some closure.

About six family members, including Mr Liong's mother, arrived at the morgue at about 8am on Tuesday to identify the body. They appeared composed but declined to speak to reporters, requesting for privacy. They left about two hours later and returned at noon to finish up the paperwork.