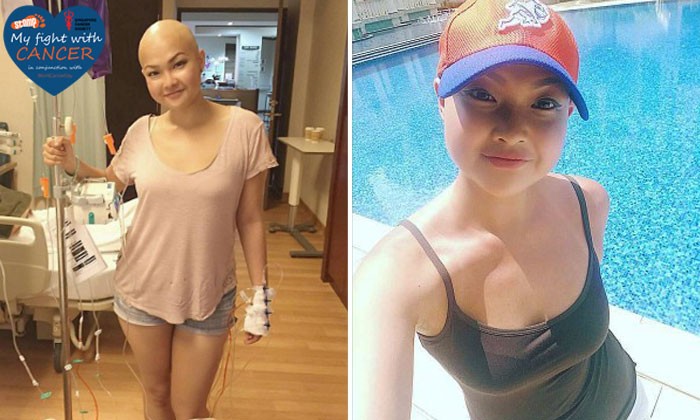 32-year-old Cara Chew served as her sister's caregiver for six months after the latter was diagnosed with brain cancer three years ago.

In Oct 2015, her sister was diagnosed with cancer again. Cara thought that she will be able to fulfill her role of caregiver again based on her experience.

Two months later however, cancer also came knocking on Cara's door. She was diagnosed with Lymphoma in Dec 2015.

Instead of letting it get the better of her however, Cara bravely fought cancer using optimism as her sword and faith as her shield.

She shared her inspiring story in an email to Stomp:

"4 February 2017 will mark my 6 months of being in remission from the day my oncologist declared me cancer free.

"I was diagnosed with Diffused Large B-Cell Lymphoma (DLBCL) and received 6 cycles of RCHOP chemotherapy from Jan 2016 to May 2016.

"If you had asked me three years ago what my cancer story was, I would’ve said that at the age of 30, I was the caregiver to my second sister who was diagnosed with brain cancer. She had a fist-sized brain tumor (hemangiopericytoma) removed.

"The following 6 months of taking care of her were trying times but I am so grateful that my sister survived brain cancer and is fully functioning.

"Having had to take care of my sister and juggling with work at the same time were trying times but by the grace of God we managed well and she fully recovered.

"Three years later in Oct 2015, my sister was diagnosed with cancer again a week after our dad underwent heart bypass surgery.

"While I was also managing multiple event/projects for work, I thought okay, with proper planning and with my really kind bosses, I could be an efficient caregiver because I was experienced.

"But then, I was diagnosed with cancer two months later.

"The most difficult part was the shift from being the caregiver to being a cancer patient, which meant that I had to manage two chemotherapy schedules AND work at the same time.  I thought to myself, how was I going to have the energy to care for my sister if she needed my help?

"And if I may add on my girliness to the set of concerns, the thought of losing my head of hair made me sad at first. I loved my voluminous thick hair. But I decided to own it in the end by trying out every single hairstyle (mohawk, pixie with bangs, etc) I wanted before I was bald.

"Being able to know the time to shave my head and do it myself was also surprisingly liberating. I ended up really enjoying my baldness and going everywhere with my skinhead.

"They say that when the going gets rough, somehow life unfolds itself; and things actually turned out well after all.

Chemotherapy wasn't as bad as we thought it would be (as compared to brain tumor recovery, because that was our reference), and by the grace of God, both my sister and I could function independently whenever we needed to.

"It taught me that if I don't take care of myself, I cannot take care of anyone else, and this forced me to learn to put myself first, as counter-intuitive as that can be for me, as the eldest & proactive one in the family."

Cara keeps maintains an Instagram profile to document her experience with cancer with hopes to inspire others in a similar circumstances. You can have a look at it here.

Related Stories
My Fight With Cancer: "No one can tell me I'm ugly... I know I'm beautiful"
Getting cancer was just the beginning of my ordeal: I became partially paralysed and couldn't even speak
My Fight With Cancer: Stigma of losing a leg was worse than cancer
My Fight With Cancer: Even a sneeze could disrupt my balance after I came out of a coma, but I battled on
My Fight with Cancer: Chronic Myeloid Leukemia patient shares his experience on beating disease
cancer
heartwarming
inspiring
Stomp's World Cancer Day campaign