My Fight With Cancer: Stigma of losing a leg was worse than cancer 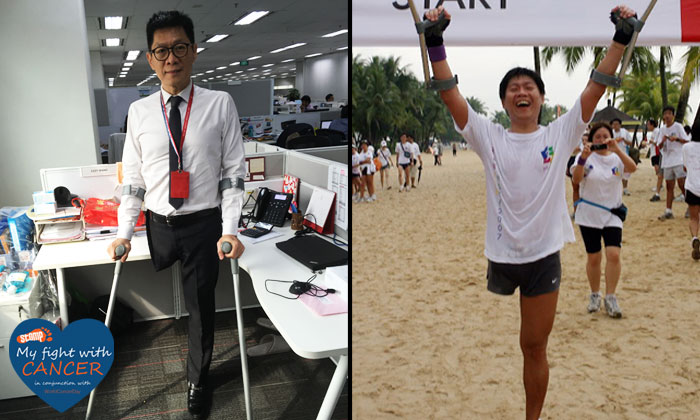 In 1996, Ezzy Wang had to have part of his right leg removed after he was diagnosed with a rare form of bone cancer.

Three years later in 1999, Ezzy, who was in his 20s then, suffered a relapse. Surgeons had to remove his pelvis and amputate his leg fully to ensure the cancer did not spread.

As part of Stomp's campaign to raise awareness of cancer to mark World Cancer Day, we spoke to Ezzy about his journey with cancer and the stigma he faced following his amputation.

During the interview at AIA Tampines where he works as a training and competency manager, Ezzy revealed that the social trauma he faced following his operation was worse than the loss of limb itself.

"I was actually in denial of the fact that I am not an able-bodied individual anymore.

"So I decided to change my thoughts. I had to change."

And change he certainly did.

Instead of getting bogged down by his disability, Ezzy now chooses to embrace life with positivity.

He was an avid sportsman before his operation, and he now strives to ensure he stays that way.

Ezzy jogs in his crutches, participates in vertical marathons and even takes up scuba diving. As if that is not impressive enough, he also competed in handcycling at the 2010 Asian Para Games.

On Feb 18 this year, the 50-year-old will be taking part in Relay for Life, an event organised by the Singapore Cancer Society in which participants walk or run together to show that no patient is alone in the fight against cancer. He plans to walk at least 3km on his crutches with his wife.

Towards the end of our meeting with Ezzy, he said he believed that he got cancer due to bad karma. He was once told by a fortune teller that he was responsible for poisoning people in his past life, and that the cancer in this life was a form of retribution.

The free-thinker has since accepted his fate and spends his time living life to the fullest rather than blaming his experience on bad luck.

He had this to say about what he learnt from his journey with cancer:

"A person will become mature only after they have overcome the biggest hurdle in their life."

Watch the video of our interview with Ezzy below.

Related Stories
My Fight With Cancer: Even a sneeze could disrupt my balance after I came out of a coma, but I battled on
My Fight with Cancer: Chronic Myeloid Leukemia patient shares his experience on beating disease
Are you fighting cancer or have fought cancer in the past? We want to hear your experiences
cancer
heartwarming
inspiring
Stomp's World Cancer Day campaign