My Fight With Cancer: "No one can tell me I'm ugly... I know I'm beautiful" 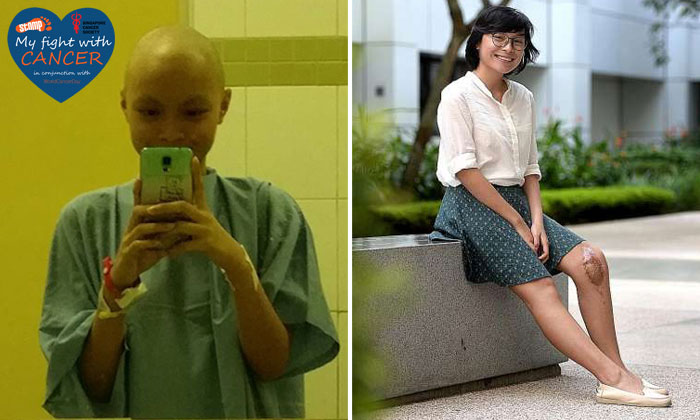 On that fateful day, the teenager was diagnosed with osteosarcoma, a rare type of bone cancer.

As part of Stomp's campaign to raise awareness of cancer to mark World Cancer Day, we spoke to the young survivor on Jan 19 to find out more about her fight with cancer. She shared with us the difficulties that she faced in her road to recovery.

The 17-year-old revealed that it was surreal experience getting diagnosed with cancer at such a young age.

Following the shocking announcement, Hui Min who was preparing for her N Levels at Junyuan Secondary School then, had to put her studies on hold.

As part of her treatment, she had to undergo six cycles of chemotherapy in 10 months. During that period, the teenager experienced vomiting, high fever and even fainted once.

Other than chemotherapy, Hui Min also had to have surgery to replace her affected left knee with a metal implant.

She was left with a big scar on her leg thereafter. That however was Hui Min's way of earning her stripes.

"They removed my bones and put a huge metal implant inside my leg. It was very very painful. But having a huge scar on my leg, it taught me that no one can tell me that I’m ugly. I know I’m beautiful," said the cancer survivor.

During Hui Min's fight with cancer, her cousin Kai Qing served as her sword and shield.

The 15-year-old Dunman High student took up the role of caregiver by providing Hui Min with moral support and a listening ear.

When Kai Qing first found out about Hui Min's diagnosis, she spent time sourcing for information online about how she could help her cousin.

"I Googled a lot of what not to say, because I really had no idea about what I could say and what could potentially hurt her. So I Googled a lot about that and about the cancer itself."

Being a teenager herself, Kai Qing also understood the issues Hui Min were concerned with, and saw to it that her fears were relieved.

"When she (Hui Min) talked about the things in school, whether it’s about academics or friends, she was very nervous because she was away for so long.

"Even though she did not show it, she was very nervous about how she was going to cope with schoolwork and stuff.

The duo also had their fair share of fun together during Hui Min's 10 months of treatment. Kai Qing told Stomp that they would fangirl over common idols, laugh together over topics they shared interests in as well as discuss what they would do during future sleepovers together.

Quipped Hui Min about the presence of Kai Qing as well as what she has gained from her battle with cancer:

"I guess she gives a very good moral support to me just by texting me how have you been, and sometimes she visits me even though she’s really really busy. It’s very touching and I guess I treasure her a lot."

"I must say that I have grown through this cancer journey, because going through all these adversities, I’ve learnt how to appreciate life, my family, the things I have right now.

"Everyday is a gift."

See what was shared by Hui Min and Kai Qing in the video below.

As Kai Qing has shown, caregiver support is extremely crucial for cancer patients.

For those who don't have someone to turn to, the Singapore Cancer Society (SCS) provides support groups to ensure patients do not have to battle cancer alone.

Through these groups, cancer survivors and their caregivers can not only share their experiences with their peers but are also able to enhance their knowledge through talks and workshops.

Said a spokesperson from the SCS:

"Listening to others share how they have been impacted by cancer and survived, brings hope to those who are similarly affected and helps them cope better with their condition."

For enquiries about such support groups, you can contact the SCS at 6221 9578 or visit their website for more information.

Related Stories
Are you fighting cancer or have fought cancer in the past? We want to hear your experiences
cancer
heartwarming
inspiring
Stomp's World Cancer Day campaign