Getting cancer was just the beginning of my ordeal: I became partially paralysed and couldn't even speak 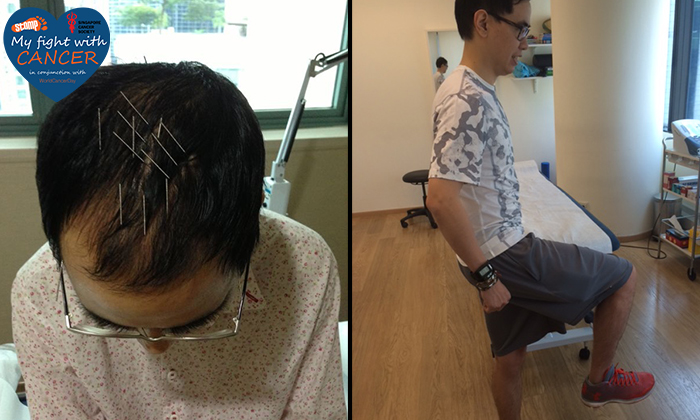 For many, getting diagnosed with cancer is like a death sentence, but for for 38-year-old Yip Beng Harng, the real nightmare came after.

The complications that he faced as a result of cancer caused Beng Harng to become partially paralysed, something that haunts him till this day, two years after he was cured of cancer.

As part of Stomp's campaign to raise awareness of cancer to mark World Cancer Day, we spoke to Beng Harng  about his journey with cancer and the obstacles he had to overcome just to be able to walk again.

After getting diagnosed with lymph node cancer in 2013 at age 35, Beng Harng's life was changed forever.

When Ben Harng was told that he had cancer, he broke down and cried, but fortunately, his wife was there for him.

“She was there by my side when the doctor read out the results.

“I was lucky that she was so strong; she was already thinking of how we should fight the cancer, while I was still in shock.”

Soon, he was told that his chemotherapy sessions were progressing well and his life was starting to get back on track — until he had a sudden relapse on his last session.

Beng Harng suddenly developed high fever and was admitted to the A&E.

Fearing a more complicated underlying condition, the doctors performed a brain biopsy on him, or as Beng Harng puts it, ‘one of the most painful procedures in my life’.

He recounted how they had to drill screws into his head and he had to be awake during the procedure.

What’s even worse, the doctors were right. With his immune system weakened from the chemotherapy sessions, Beng Harng had contracted Toxoplasmosis, a parasitic disease that targeted his brain and resulted in the formation of a lesion on his right brain.

Beng Harng subsequently fell into a coma for two and a half weeks and even after he woke up, the nightmares remained: The entire right side of his body and vocal cords were paralysed.

“I was devastated and scared.

“No one could even understand what I was saying.

“It then dawned on me that I could not walk.”

For the next five months, Beng Harng was wheelchair-bound.

Despite that, he never gave up, enduring long gruelling hours of physiotherapy every single day.

Finally, his hard work paid off and he was able to walk again, albeit with aid.

He was discharged from hospital in mid 2014, but had to go for voice therapy sessions to learn how to speak again, while continuing with his physiotherapy sessions once a week.

To adjust to his new condition, Beng Harng switched careers, taking on the role of a consultant manager, a job that did not require as much travelling as his previous job as a customer engagement manager.

Today, Beng Harng is able to walk and speak unaided, but still walks with a limp.

“The brain is a strange thing.

“It is able to compensate for what’s lacking.

“Even if the right side isn’t what it used to be, I am still able to do things like a regular person.

“I’m still recovering now, and I will be able to run again in the future.”

Asked what he had learnt from his fight with cancer, Beng Harng answered that since contracting Toxoplasmosis, he has learnt to slow down, and appreciate things for what they are.

He said: “Part of Toxoplasmosis’s side effects is that your brain processes information slower.

“But through that, I’ve learnt to stop and smell the roses once in a while.”

Watch the video of our interview with Beng Harng below.

Related Stories
Are you fighting cancer or have fought cancer in the past? We want to hear your experiences
cancer
heartwarming
inspiring
Stomp's World Cancer Day campaign