My Fight With Cancer: Even a sneeze could disrupt my balance after I came out of a coma, but I battled on 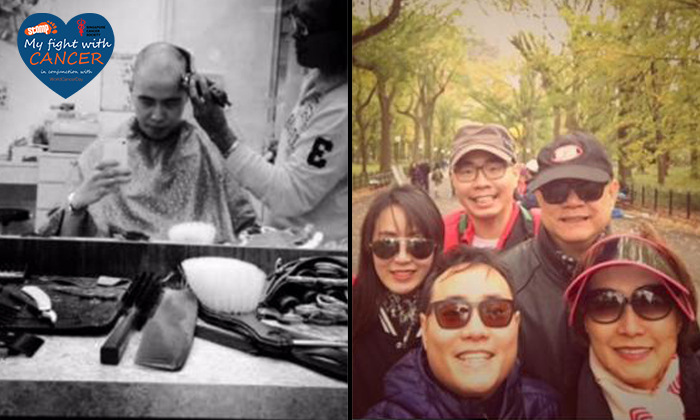 Beng Harng had just gotten back from a trip to Maldives and Japan when his stomach started feeling bloated. No matter how many times he went to the toilet, the sensation wouldn’t go away, so he went to a doctor.

The doctor prescribed him some medicine for indigestion, but his condition did not improve even after taking the medication.

Beng Harng made an appointment with his family doctor, who suspected that something was wrong and promptly did a positron emission tomography (PET) scan on him.

They found a large growth in Beng Harng’s stomach and his lymph nodes had become significantly swollen as well.

The doctor recommended him to go for an biopsy, that entailed him removing the lymph nodes from his groin.

Beng Harng recounted how he felt:

“I remembered lying there in the waiting room, being scared out of my wits.

“I teared a little and at that time I started wondering ‘Why me?’

Before long it was his turn to enter the operating theatre.

“The surgeon came in and assured me that it was an easy operation.”

There, the anaesthesiologist hooked him up to anaesthetics and he was out soon enough.

When Beng Harng regained conscious, he was in a ward and he was told that he had been out for an hour.

His wounds didn’t hurt as much as he thought.

However, worse things were to come; when his family doctor visited Beng Harng’s ward in the afternoon, he bore bad news — Beng Harng had lymphoma or the cancer of the lymph nodes.

Beng Harng’s world came shattering down on him:

“How are my parents and wife going to deal with this?

Beng Harng cried just thinking of how this news would affect his loved ones.

When his parents and wife found out, they put on a brave front.

There were no words of comfort, for they knew no one could guarantee anything at the point, and whether Beng Harng would survive depended on the next few decisions.

They did not give up hope however,  and searched high and low for a doctor who specialised in lymphoma, and eventually came across Dr. Freddy Teo, whom Beng Harng’s mum picked due to his vast experience in the field.

“Dr. Freddy came across as a trustworthy and friendly doctor with years of experience under his belt.”

He also had to be constantly monitored with a electronic thermometer for any symptoms of a fever.

Despite all that, Beng Harng felt that the sessions weren’t as terrible as people made them up to be.

He didn’t throw up at all, although he thought this could have been due to the anti-nausea medication that he was on.

However, his hair started falling:

“Every time I grabbed a handful and pulled gently, they all came out.”

He eventually decided to shave everything off for a more uniform look and bought beanies to keep his bald head warm when he slept… and also for the cool factor.

His friends also provided him unwavering support through his fight with cancer, meeting up for lunch, and even making him a scrapbook to encourage Beng Harng.

It was then he truly understood how important his friends were to him too:

“What would you do without friends?

“I was going to win the fight against cancer no matter what.”

Despite his positive outlook, obstacles still stood in his way.

After Beng Harng underwent his last session of chemotherapy, he suddenly developed a high fever that night and his wife insisted that he be admitted to the A&E.

The hospital staff drew some blood after that.

Beng Harng also had to under a brain biopsy:

“It was a terribly painful ordeal and they had screws in my head to hold the device in place.

“The worse part was that I had to be conscious for the procedure.”

It turned out that Beng Harng had contracted toxoplasmosis, a rare disease that arises from a weak immune system, and he slipped into a coma for two and a half weeks subsequently.

His wife stayed by his side throughout his stay in the Intensive Care Unity (ICU) the next few nights.

When Beng Harng awoke, his wife told him that she had put a pair of headphones on him but there was no reaction from him.

Tragedy struck, when Beng Harng realised that he could not feel the right side of his body:

“I kept drooling and wondered why.

“Soon, i realised that my entire right side was paralysed.

“The toxoplasmosis had left me with lesions in my brain and affected my mobility and balance.

“Even my vocal cords were paralysed and no one could understood what I was saying.

“They then performed a tracheostomy on me because they were afraid I might choke, and I had to be on a liquid diet for the rest of my stay in the hospital.

Beng Harng underwent physiotherapy and occupational therapy  every morning for the next two weeks.

The nurses would also wiped him down as he was was wheelchair bound.

Thankfully, after the intensive physiotherapy, Beng Harng regained the ability to walk unaided.

Although he still walks with a limp now, Beng Harng is thankful that he is getting better.

Beng also had to undergo speech therapy, where electrodes were stuck to his throats:

“I think my voice recovered the fastest because I spoke everyday.

It’s been three years since Beng awoken from his coma and things have been getting back on track.

“I remember when even a sneeze would disrupt my balance and result in me falling down.

“I also remember trying to run and falling down, breaking my ribs.

“My goal is to be able to walk properly and eventually run in the future.

"I'm also grateful to my family and wife who stood tirelessly by my side during my fight with cancer.

"They took turns to be with me, day and night while I was in ICU.

"My wife and mum were with me through my entire physiotherapy and speech therapy to provide moral support.

"My Dad also took the time to exercise with me every morning to help speed up my recovery. "

"To others out there, please make sure you have adequate insurance as the cost of treating cancer is very high."

Read more stories about other inspiring fights with cancer here.

Related Stories
My Fight with Cancer: Chronic Myeloid Leukemia patient shares his experience on beating disease
Are you fighting cancer or have fought cancer in the past? We want to hear your experiences
Cancer will not bring down this woman -- and she will keep dancing
My fight with cancer
inspiring
Stomp's World Cancer Day campaign
cancer