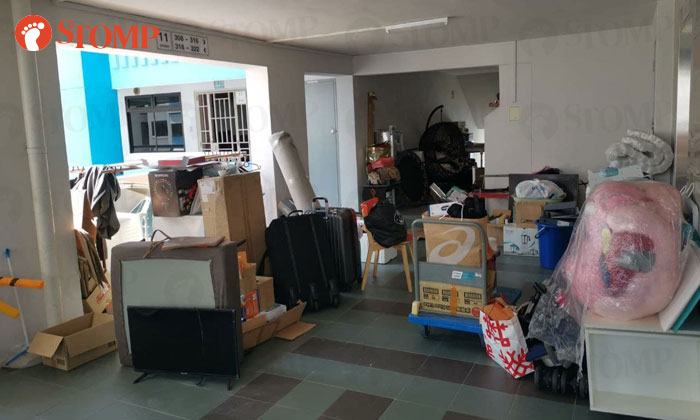 Clutter belonging to a Sengkang resident has spilled over into the common corridor and lift lobby she shares with her neighbours.

A Stomper who lives at Block 228B Compassvale Walk told Stomp that they have reported this matter to Sengkang Town Council several times but the situation has only gotten worse.

In photos shared by the Stomper, the resident's clutter fills the common corridor, lift lobby and even the staircase landing.

"It's highly obstructing the pathway," the Stomper said.

"When there is an emergency, everybody will be stuck by their stuff."

The Stomper hopes to shed light on this issue so that something can be done about the clutter.

Another neighbour told Shin Min Daily News the items belong to a female resident who lives in a unit next to the lift lobby.

She reportedly collects pre-owned items and uses the common area as a personal warehouse.

One resident said the woman lives with her parents and started hoarding items three years ago.

She added that she is moving out to avoid getting into a dispute with the woman.

Stomp has reached out to Sengkang Town Council for comment.