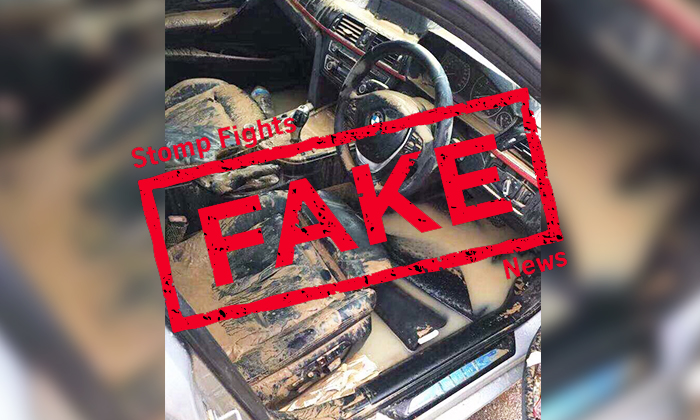 A reader claims his rented BMW car, which he uses to drive for Uber, was stuck in Monday's (Jan 8) floods.

However, Stomp finds out that the photo was actually taken last year in Malaysia.

The reader, Melvin, first submitted the photo to Stomp via WhatsApp on Jan 8, claiming that his BMW was stuck in yesterday's floods in Bedok North at around 9am.

Stomp then contacted him via WhatsApp where he responded, saying that he was overseas in Malaysia.

The photo he claims he took shows a muddy interior of a BMW, with water on the seats and on the floor of the car.

"Not covered under insurance... It is considered an act of god," said Melvin.

He also said that the insurance company said that he shouldn't have driven into the water.

"But the gradient was quite sudden.

"Before I knew it the water was very deep already could not escape and engine stalled (sic), " said Melvin.

Melvin added that he is "very sad" and claims that he has to drive for four months to recoup the losses.

However, a Google image search done by Stomp shows that the photo he claims he took was actually of a car stuck in the Penang floods in November 2017.

The photo was initially featured in online publication JUICE Malaysia as part of a gallery showcasing the devastating floods that struck Penang.

This is contrary to Melvin's claim that the photo that he had sent to Stomp was of his BMW that was stuck in the flood at Bedok North.

Here is a side by side comparison between the two photos.

Melvin's photo that he sent us on WhatsApp (left), Juice Malaysia's image (right) 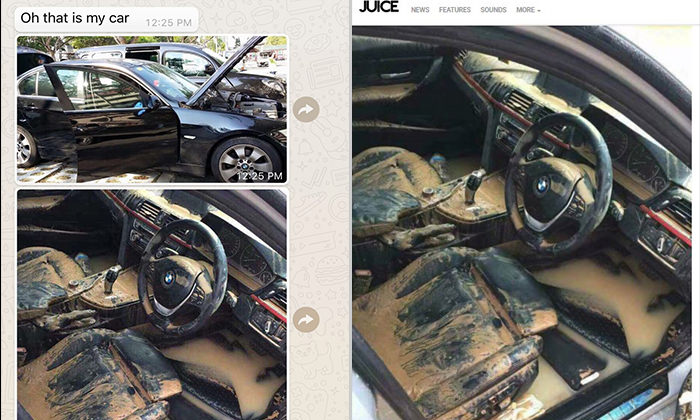 Notice the similarities? Even the water bottle can be seen at the exact same place in both photos.

You can read more about how you can help to fight fake news here.