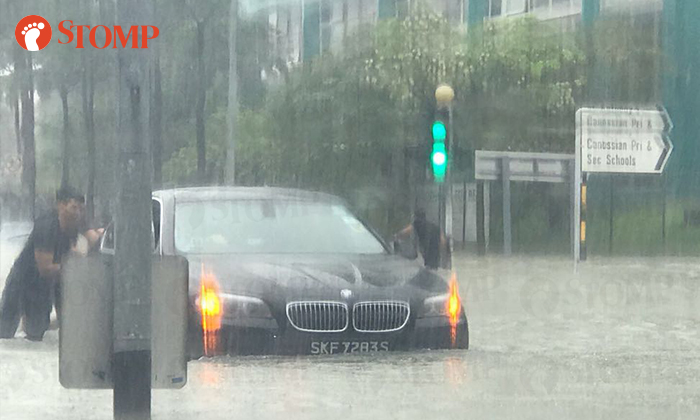 Flash floods struck several parts of Singapore after heavy rain this morning (Jan 8), causing traffic to come to a standstill.

Several Stompers alerted us to the flash floods, one of which occurred at Bedok towards Changi Business Park.

Another flash flood was alerted to us by Stomper Kai, which was said to have occurred at a junction along Changi South near Changi Fire station.

Kai, who stuck in the flood, shared his experience with Stomp:

"I was stuck in my vehicle for around 15 minutes. My car was able to move but I couldn't go in front as the water level was too high."

"I dare not go further as many cars had already stopped in the middle of the road. I think if I go any further my engine will die off."

He also saw men believed to be Singapore Civil Defence Force officers coming out of the nearby fire station to help others.

Commending the officers' behaviour, Kai said, "The firemen were helping to push the cars out of the water."

He later managed to reverse out of the flooded stretch of road when the officers directed the vehicles that were behind him to u-turn.

Kai added that the water level was 'knee-high' and that it was a 'scary' experience overall.

Separately, members of the public were also seen helping to push a vehicle in the flood, in a video that Stomper Dean sent.

A photo that Stomper Gerek sent shows a tree that had collapsed in Toa Payoh after this morning's heavy downpour. 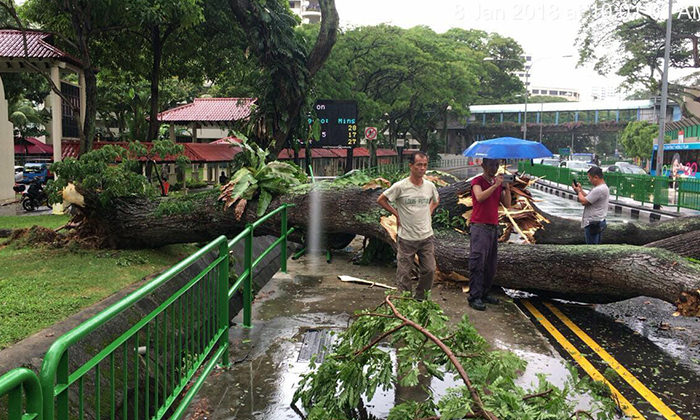 Other parts of Singapore were also affected by the flash floods the Public Utilities Board (PUB) and the Land Transport Authority (LTA) both warned of flooding at Tampines Road, Sims Avenue, Jalan Nipah and Arumugam Road.

Traffic was impassable at Jalan Nipah due to the flash flood, according to a tweet by PUB at 9.26am.

PUB also announced that several waterways including Bedok Canal, Sungei Tongkang and Sungei Kallang were over 90% full, resulting in the agency issuing a 'high flood risk' alert for those areas.