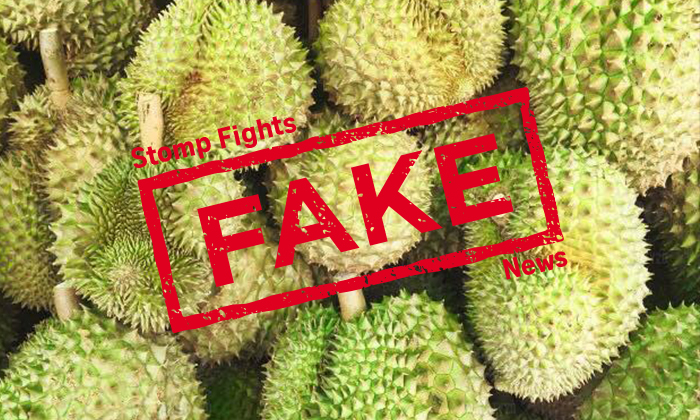 Following rumours that durians imported from Malaysia had contained insecticide, the Agri Food and Veterinary Authority (AVA) has issued a statement saying that the durians here in Singapore are safe for consumption.

The rumour, which was started by a Facebook page called 'Our Singapore', claimed that China rejected all the Musang durians due to high levels of insecticide detected in the fruit.

AVA's statement which was posted on their Facebook page on Nov 21 assured Singaporeans that it is safe to eat durians that are imported from Malaysia.

"Some durian lovers have come across rumours about high levels of “insecticide” in Malaysia’s Musang King durians, and asked if it is safe to consume durians imported from Malaysia."

AVA says that it conducts stringent checks and regularly conducts inspections and sampling of imported fruits, including durians, so that they comply with the food safety standard and requirements.

Samples are tested for the prescience of pesticide residue and nitrobacteria contamination.

"Imported fruits that fail our inspection and food safety tests will not be allowed for sale," wrote AVA.

Related Stories
Man's $112 durian experience shows you why you need to check what you're paying for... before eating
Durian prices reach 33-year high: Here's how much 1kg of 'Mao Shan Wangs' cost
F1 drivers try durian for the first time in S'pore -- and were totally unprepared for it
More About:
Stomp fights fake news
durian