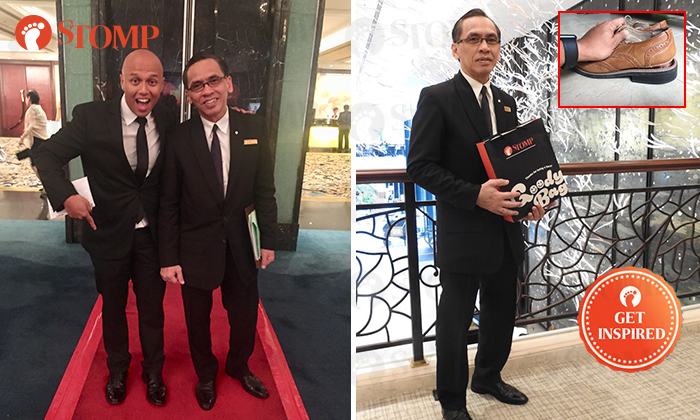 Andre Hoeden, DJ of Singapore Press Holdings' radio station One FM 91.3, had his very own Cinderella moment with his ‘Prince Charming’, a banquet operations manager from Shangri-La Hotel Singapore. His 'fairytale' happened on Thursday, Nov 16.

Andre, who was preparing to host St. Margaret's School's 175th Anniversary at the hotel's Island Ballroom at 7pm, was in the toilet getting ready when he felt a strange sensation on his left foot.

He soon realised that the sole on his left shoe had partially come off.

To make matters worse, the Guest of Honour, President Halimah Yacob herself, was scheduled to arrive at 7.30pm.

Andre told Stomp: "I asked around for glue to fix my shoe, as the Guest-of-Honour, President Halimah Yacob, was about to arrive at 7.30pm."

And it was at this Cinderella moment that Banquet Operations Manager Mohammed Razali Sith became Andre's Prince Charming. Instead of bringing Andre glue, he brought the DJ his own pair of shoes.

Andre said: "It was truly a Cinderella story, and he was my prince! And we happened to be of the same size!"

Stomp subsequently contacted Shangri-La and sat down to have a chat with Mr Razali himself.

Mr Razali, who recently turned 60, told Stomp that he has been with Shangi-La Hotel Singapore for over 37 years.

Recalling the incident that day, Mr Razali said that he had noticed something amiss at a corner of the stage.

He went over and a woman next to Andre approached him for help, telling him that the sole of one of Andre’s shoes was falling off. She asked if he could help to glue the sole back.

Mr Razali told Stomp: "It’s like the eleventh hour and the show was about to begin. We were about to open the ballroom doors."

Razali knew that even if he went down to the engineering department to patch up Andre’s shoe, it would not last until the end of the event.

He decided to offer Andre his own spare pair of shoes from his locker instead.

Mr Razali explained: "I keep a spare pair of shoes which I put on when I meet VIPs.

"The shoes are polished like military boots. The other pair I have is for everyday work."

After taking a look at Andre’s feet, Mr Razali estimated him to be a size 9 -- the same size as his spare pair of shoes.

The moment of truth came when Andre tried on the pair. To everyone’s relief, they fitted him perfectly.

Asked how he felt about Andre describing him as the ‘Prince Charming’ to his Cinderella story, Mr Razali, slightly embarrassed, said: "I feel honoured to save the moment.

According to Mr Razali, this was not the first time a guest had approached him with a similar problem.

Many guests, mostly ladies, often go to him when the soles of their shoes come off, and Razali would have them fixed at the engineering department.

When Stomp presented Mr Razali with a Goody bag, he was elated.

"It is something for me to remember (this incident) by. I can recall how I get these goodies, so I will be able to tell this story to my children or grandchildren."

Stomp presented Mr Razali with a Stomp Goody Bag as part of our efforts to recognise everyday heroes and highlight heartwarming deeds.

Related Stories
Stomp talks to man whose $2,000 tip made waitress cry: "It's not about being rich"
Single mum working multiple jobs cries after getting $2,000 tip from kind S'porean guy
Heroic Stomper Stone to the rescue again -- this time helping 3 injured riders in accident near JB customs
More About:
inspiring
Stomp Goody Bag