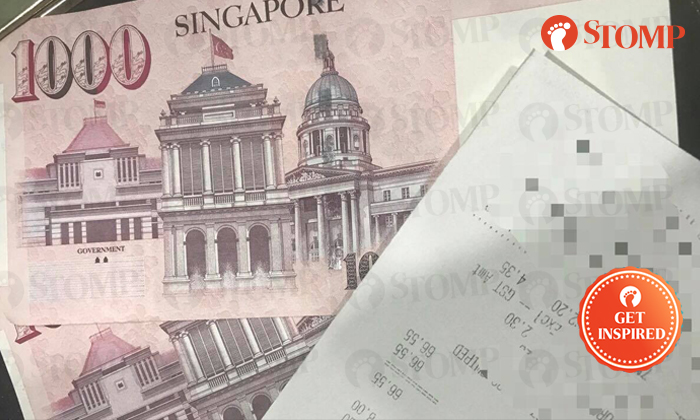 Stomp got upclose and personal with the kind Singaporean man who left a $2,000 tip, whom we identified as 32-year-old Mr Atwell Tay.

Read the full story here: Stomp talks to man whose $2,000 tip made waitress cry: "It's not about being rich"

Single mother Stomper XYW, who is from Malaysia, struggles to make ends meet and has to take up multiple jobs in Singapore to support her two young children after her husband walked out on her.

"I came to Singapore 10 years ago and am currently a Permanent Resident. My kids are aged five and six. My ex-husband, a Singaporean, left me for a girl from China," said XYW, who declined to be identified over fears of losing her job at a restaurant in Katong.

The 37-year-old also does other odd jobs such as house-cleaning, but despite her hard work, has hit a bump in the road as her kids' childcare fess were due.

However, a customer's recent kind act moved her to tears.

XYW recounted the touching incident to Stomp: "Earlier this week, a couple who are regulars in the place that I work in, came in and ordered their usual soup and food, and one coke.

"I was clearing their table after they finished their meal, when the guy casually asked why I looked rather sad as usually I'm very cheerful.

"Previously, we had casually chatted a few times and he noticed that I am holding down many odd jobs and am working very hard as a single mother."

That was when XYW revealed that she had gone to clean three houses that day and had just began her night shift at the restaurant, leading the customer to ask if everything was all right.

The Stomper said: "I told him that my kids' childcare fees was due and I was having issues, but I just had to work harder.

"He then smiled and asked for the bill. The total bill was $66.

"After I went to the counter to swipe his Visa card, I realized he had placed his Visa card and two $1,000 notes into the bill folder.

"Feeling puzzled, I thought he had made a mistake and accidentally left the two pieces of $1000 notes inside. When I passed the receipt for him to sign, I returned it to him.

"That’s when he told me something I will never forget. He said, "No it's not a mistake, we have two hands, one is to work hard and the other is to help others."

"I cried after they left. I wanted to thank him and I saw the name on his credit card. I would like to say my deepest thanks to him as it helped to tide me over for my kids' school fees."

Stomp has reached out to the kind Singaporean guy who helped the Stomper as we would like to present him with a Goody Bag.