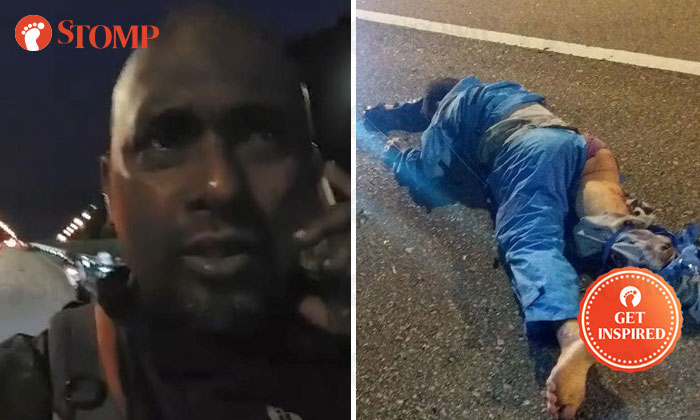 Stomper Stone came across an accident involving three motorcyclists near the Malaysia–Singapore Second Link today (Nov 8) at 6.20am and stopped to offer help.

This is not the first time Stone has stopped to render assistance to accident victims.

In a previous incident, he had pulled a trapped driver from a flipped car in Johor Bahru.

Speaking with Stomp in a phone interview, Stone said he had stopped his bike by the side of the road upon noticing a bloodied man lying on the road.

He then activated blue warning lights on his motorcycle to warn the oncoming traffic about the accident.

Another passing motorcyclist had stopped to render assistance as well.

A couple on another bike and another male rider were also involved in the accident.

According to Stone, the couple sustained injuries but the other rider escaped unscathed.

Stone went to check on the motorcyclist on the road.

Upon making sure that he was breathing, Stone and the other passing rider called the toll station for assistance.

However, the rider was unsure of their location and could not converse in Malay.

He dropped the call and asked Stone to make the call instead.

"I called the hotline and asked the operator to put me across to the ambulance personnel directly.

"I told them it was in the Gelang Patah zone, about 1km away from the Second Link.

"The victim was still alive and breathing.

"I had to pat him hard every few minutes to ensure that he was conscious.

"He was in a recovery position and I didn't want to move him.

"His injuries looked quite serious.

"There was blood streaming from his head.

"From the looks of it, his helmet might have flown off.

"So many vehicles were passing by, but no one stopped to help."

About 10 minutes later, a police patrol car arrived at the scene, followed closely by an ambulance.

After handing the victim over to the paramedics, Stone left.

"This stretch is usually quite dark in the morning and the street lights aren't on.

"So riders should be careful.

"Also, get a better helmet with a secure clip so it doesn't fly off if you get into an accident.

"Lastly, motorists should be clear where they are so they can get help as quickly as they can if the situation calls for it."

Related Stories
Biker who pulled trapped driver from flipped car in JB: "It's ok to be kaypoh"
SMRT train driver makes Thai visitor "really trust the country of Singapore" after returning wallet
Thank you Grab driver for returning handphone that I left behind in your car
More About:
inspiring
help
accident
customs
motorcycle