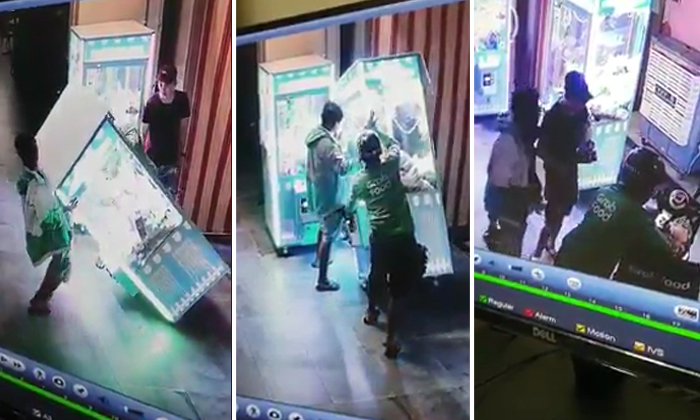 Three men were caught on camera shaking numerous toys out of a claw machine in Clementi during the wee hours of Thursday (Feb 13).

The incident occurred near a coffee shop at Block 328 Clementi Avenue 2, where two claw machines are stationed.

A Stomper alerted Stomp to closed-circuit television (CCTV) footage of the incident that has been circulating on social media.

In the 13-minute video, three men can be seen repeatedly tilting, lifting and shaking a claw machine before collecting the toys that fell out.

Two of the men are reportedly food delivery staff based on their attire.

The trio are subsequently seen placing the toys on a bike as well as stashing their loot in a food delivery bag.

Someone viewing the CCTV footage can be heard saying in the background: "This thing happened on 13th February, midnight... From 2am... almost 2.40am."

Ms Chen, a partner of the shop that owns the claw machines, said she learnt of the incident after the coffee shop's boss called to inform her that the number of toys in the machine had greatly decreased overnight.

The men's behaviour came to light when she checked the CCTV footage that night.

Ms Chen, 40, told Shin Min Daily News that the machine had just been replenished with 50 toys a day before the incident. This is usually done every four to five days.

Therefore, the sudden dip in the number of toys aroused suspicion.

"They stole more than 10 toys, three of which are worth around $10. This does not include mini figurines that cost $5 each," added Ms Chen.

The police have not been informed yet.

However, the three men are familiar faces and two of them are residents in the vicinity.

Ms Chen said: "The company has not decided on what action to take, whether to locate the men and request that they return the stolen toys, or to lodge a complaint with the food delivery company directly."

The company is also discussing precautionary measures to prevent similar incidents in future.

While the company has not ruled out installing the claw machines in a fixed position, they fear even greater losses if the machines are forcibly removed.

Stomp has contacted the food delivery company for comment.

Related Stories
Foodpanda deliveryman says he was fired after taking statues from altar: 'I had permission from the gods'
Man who grabbed towel from Bedok Reservoir Road corridor not from GrabFood
Grab deliveryman arrested for stealing customer's shoes at Keat Hong Close
Determined auntie shakes 200kg claw machine at Lucky Plaza until stuffed toy drops out
More About:
theft
stealing