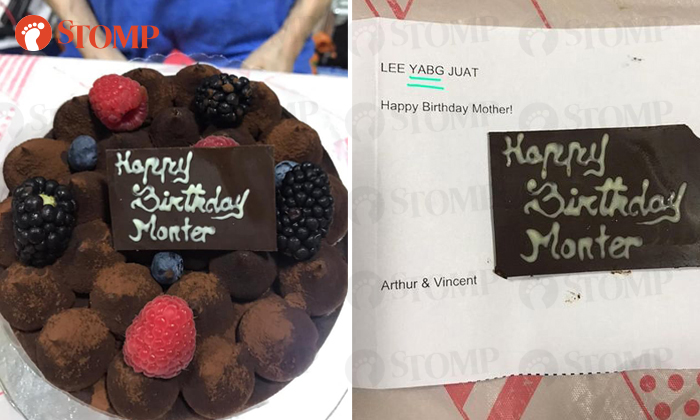 To mark his mother's 85th birthday, Stomper Arthur decided to splash out on a cake for her.

He bought her a plant as a birthday gift as well as a chocolate cake, both of which he ordered from Ferns N Petals, and paid $113 inclusive of delivery.

On its website, Ferns N Petals touts itself as the "world’s largest florist chain and leading online gifting portal" that has been in business for over 25 years.

It also prides itself on letting customers "experience gifting like never before".

Arthur said that he left instructions requesting that the birthday cake come with a message that says, 'Happy Birthday Mother!'

However, the cake that Arthur received had a misspelling of 'mother'. Instead, the message reads, "Happy Birthday Monter'. 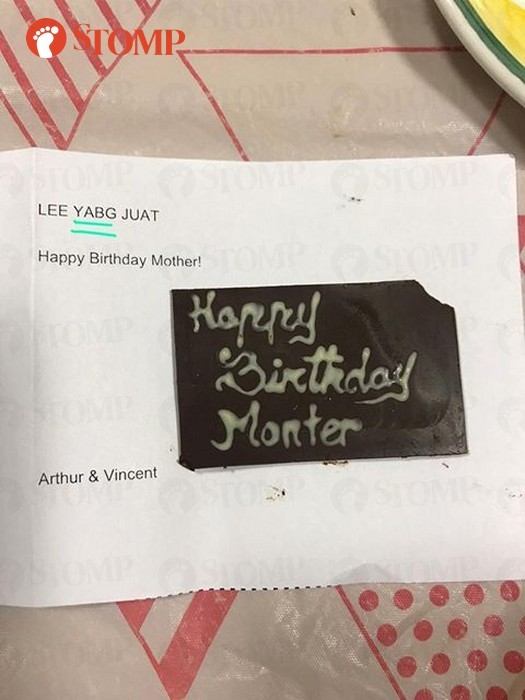 To add insult to injury, Arthur was offered a 10% discount off his next order after he informed Ferns N Petals of the incident (see screenshots in the gallery).

The Stomper said: "What a laugh. Would I ever order from Ferns N Petals again? Hmpff...

"As of now, there’s still no direct response from Ferns N Petals Singapore."

In response to Stomp queries, Ferns N Petals Singapore said it is aware of the incident.

However, Ferns N Petals does not produce the cakes and instead, collaborates with vendors who fulfil customer requirements, said the company.

"Ferns N Petals then brings the solution to customers who are looking for cakes and flowers together, so as to fulfil this requirement," it added.

"As per the incident, we have already raised a flag to our vendors for these mistakes. As for customer resolution, this issue has been resolved between Ferns N Petals and the customer."

Related Stories
Woman buys $85 hamper for sick mum, gets charged $116 for item that looks nothing like ad
Disappointing Gin Thye cake arrives late and 'straight into trash bin' on Mother's Day
Florist says "definitely" can deliver with no mishaps on V-Day -- so of course it all goes wrong
More About:
expectations vs reality
online shopping
bad service