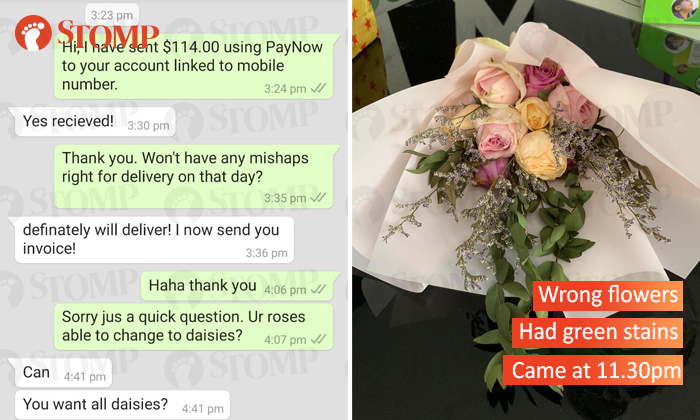 Bespoke florist company Plush Lovers has apologised to customers for its "Valentine’s Day fiasco" where orders were undelivered.

Two customers, Stomper CG and Teron, separately shared with Stomp their unpleasant experiences with Plush Lovers on what was supposed to be a celebratory day.

In the first case, Stomper CG said he paid $114 for a bouquet of daises adorned with LED lights as a surprise for his wife.

The order and payment was made on Feb 3.

CG had specifically requested for daises as his wife did not like roses. The add-on for LED lights cost him an additional $10.

He also confirmed that there would be no mishaps on Valentine's Day, to which Plush Lovers replied, "Definitely will deliver!"

And deliver they did ⁠— at 11.30pm, with the wrong flowers and no LED lights.

To make matters worst, Plush Lovers had called CG's wife to inform her about the late delivery — thus effectively ruining what was meant to be a surprise.

CG told Stomp: "I ordered daisies with LED lights, only to receive roses with no LED lights. My wife does not like roses and it was a specific instruction that I had given Plush Lovers.

"If you think the incorrect delivery was bad, wait till you hear how their delivery driver called my wife at 7pm to inform her that her flowers were on the way and would reach in an hour's time.

"Is there any more element of surprise for my wife after being told her flowers were on the way?

"Furthermore, the flowers arrived at 11.30pm looking flat. Look at how tiny and wilted the roses are, those bunches of ugly green bushes that looked like they had been plucked from my neighbour's pot of flowers, and lastly the greenish stains on the roses.

"It's definitely the worst ever bouquet of flowers my wife has received from me in seven years." 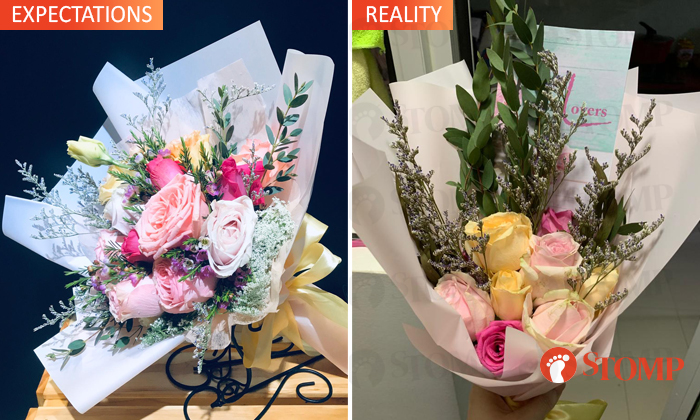 (CG felt that the bouquet fell short of expectations) 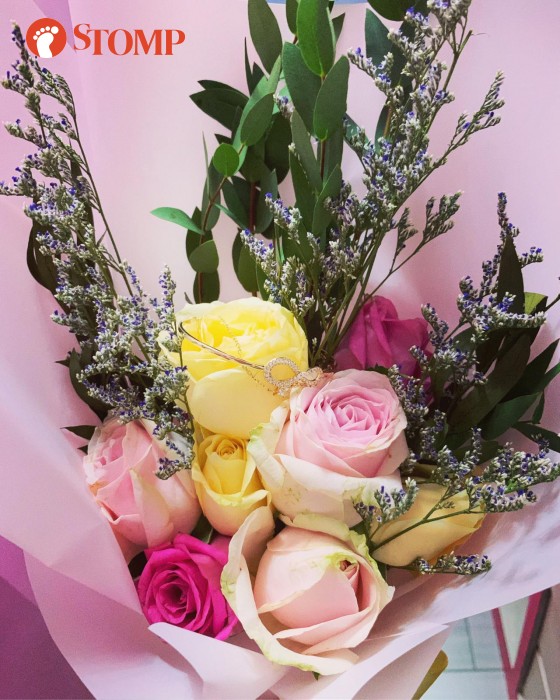 (Greenish stains can be seen on the flowers) 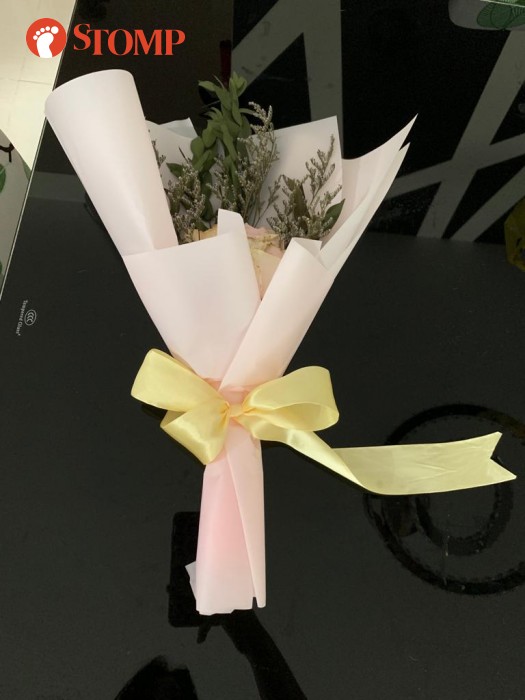 The Stomper was left further distressed when Plush Lovers failed to respond to any of his messages throughout the day, both before and after the bouquet arrived.

He said: "My conversations with them were one-way. They failed to reply or even answer any phone calls."

In screenshots that CG shared with Stomp, he can be seen berating the company for ruining the "f***ing surprise" and referring to the screw-up as "f***ing pathetic".

CG was also incensed by the service recovery that he received afterwards.

He recounted: "After continuous hassling and requesting for an answer, their recovery was simply pathetic. They only bothered to contact me on Feb 15 to explain with a load of excuses, but did not perform a proper recovery.

"I was told that 1) the delivery driver went missing in action, 2) the phone went missing and hence there were no replies on WhatsApp, and 3) part-time flower wrappers were behind the ugly bouquet of flowers.

"They also explained that they were unable to handle mass orders as the online ordering system did not cap a limit on orders.

"After explaining all these, there was absolutely no intention to redo a new bouquet, to refund me my $10, or any effort to comfort the customer."

"I had to personally demand for a refund for the LED lights and had to threaten to report to the police if my $10 was not refunded."

(The Stomper was initially given only a $10 refund)

In response to queries by Stomp, Plush Lovers said it has since made a full refund to the customer and "resolved the situation in his favour".

CG confirmed this and added: "They suddenly approached me after leaving the matter for dead. The person who dealt with the situation this time handled it well.

"Honestly I did not care if they refunded me. I just disliked their lack of responsibility and how they dealt with the entire thing after the whole mess.

"Yes, they solved my case professionally. But the fact that their irresponsible actions had caused trouble to many other clients can't be ruled out.

"During my first contact with Plush Lovers, it felt like there was no intention to do anything on their end. A recovery was done only when Stomp approached them."

CG also explained why he was so "affected and paranoid" over Plush Lovers' failure to keep their promise about delivering his bouquet with no mishaps.

"As the eldest nephew, I was there to help with the setup and being with guests who had come to pay their respects.

"Since 3pm, I had continuously requested for updates from the company every now and then but received zero response. I tried calling but they cancelled my calls.

"It was absolute paranoia for me as I was unable to celebrate Valentine's Day with my wife due to the unforeseen circumstances.

"All I could do was to provide her a beautiful bouquet of flowers as a surprise. But that was taken away from me too." 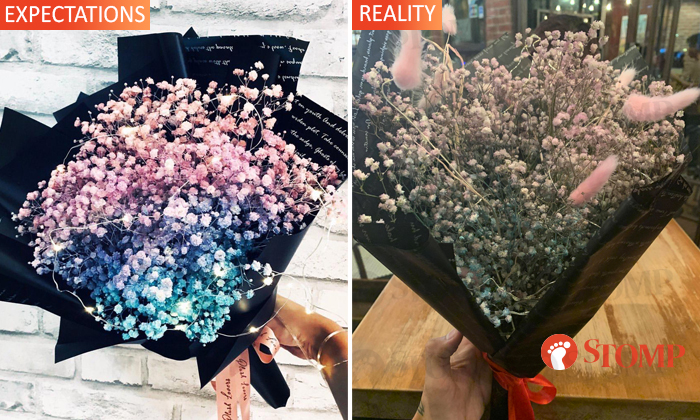 In the second incident, Stomper Teron had opted for self-collection of his bouquet from Plush Lovers but was left disappointed as well.

Teron, who ordered a Pastel Babybreath Bouquet, said: "I decided to support this florist after chancing upon their Facebook advertisement, judging from the photos they posted and how not a single negative comment was seen.

"Upon arriving at the store, I was asked to wait for 15 minutes as the bouquet was not ready.

"Time passed and nothing was mentioned. There were also multiple customers waiting for their orders in the shop.

"I repeatedly checked with the staff if my bouquet would be ready any sooner, as I was rushing off to my dinner reservation which I had already made a non-refundable deposit for."

Teron said his bouquet initially cost $109, but he later topped up another $10 for LED lights.

He added: "I ignored the price as I thought the bouquet looked beautiful in the advertisement.

"However, when I saw my bouquet, I requested for the LED lights and some cottontail to be added as I found it rather plain." 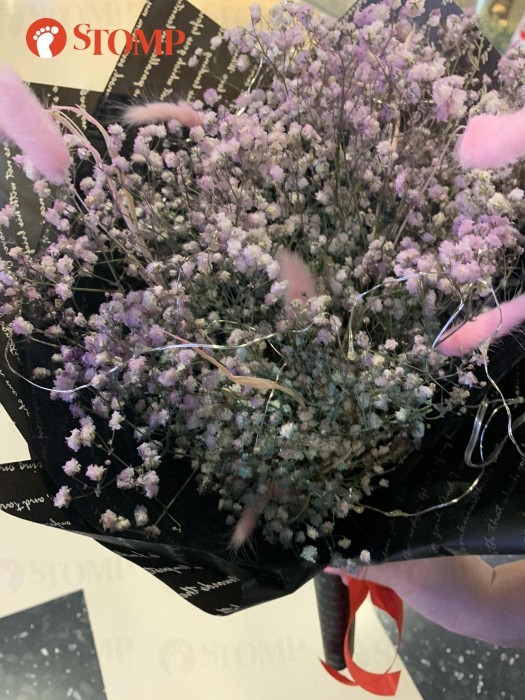 According to the Stomper, his bouquet was smaller than what was advertised and also had a different ribbon from what was pictured,

He added: "But by that time, I was stressed up from explaining to my girlfriend about my whereabouts as she was already waiting somewhere for nearly an hour. Therefore, I hurriedly left the shop without thinking so much.

"In the end, I waited patiently for more than an hour and my dinner reservation was forfeited as it was past the reservation timing."

Similarly, Teron tried texting Plush Lovers for an explanation about "the vast difference of the bouquet" from its advertisement but said he did not get a reply "throughout the whole night".

He told Stomp: "I thought, ok maybe they were still busy rushing the bulk orders.

"It was until Sunday when they replied and said the phone was lost. I waited for an answer again, but they went MIA.

"And there came the blast on Monday, saying they noticed from the CCTV camera that I left the shop without expressing my discontent and it wasn't fair if I ask for a refund now.

"They tried to be sarcastic saying it was as though I had gone to a restaurant and complained after finishing my food." 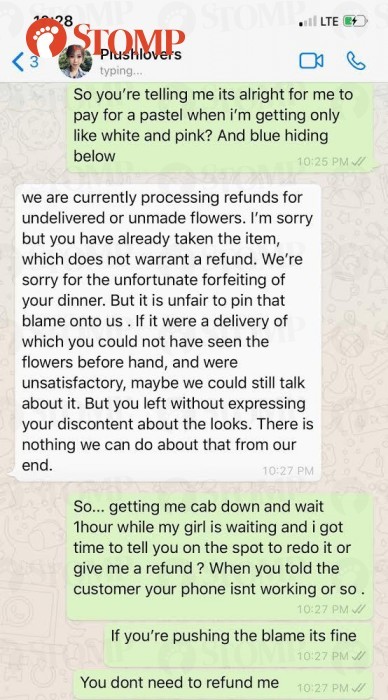 In screenshots that Teron shared with Stomp, Plush Lovers is seen saying that he should have brought up his dissatisfaction on the spot so that they could have rectified it immediately.

They also told him that a refund was unwarranted as he had already taken the bouquet and that it was unfair to blame them for his missed dinner reservation.

"This conversation will never be resolved" and "Please do as you deem fit," Plush Lovers replied to Teron, after he said he would file a complaint with the Accounting and Corporate Regulatory Authority (ACRA) and 'publish a story by Friday'.

Teron told Stomp: "There was zero effort in service recovery. They provided such quality and did not want to take responsibility for it.

"It's pretty sad that I paid $119 for cheap flowers and LED lights."

Teron, who can be seen commenting on Plush Lovers' Facebook posts about his complaint, also shared screenshots from the company's Instagram page. 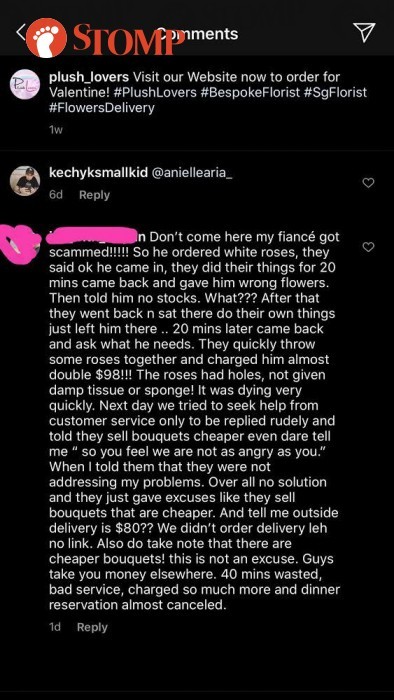 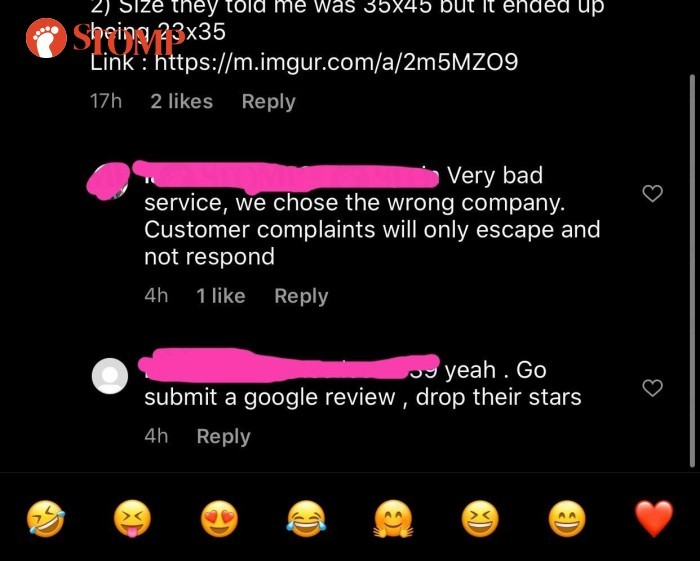 Both CG and Teron alleged that Plush Lovers had deleted negative comments from its Facebook page.

Responding to Stomp queries about Teron's case, Plush Lovers said it had apologised to the customer for making him wait but "his dispute was about the looks of the flowers".

Plush Lovers added: "We told him that if he had immediately mentioned something when we gave him the bouquet, we could have done something about it, like even offering an upgrade to the flowers.

"His bouquet even had rabbit tails in them, which the original bouquets did not come with.

"We told him that it was unfair to ask for a refund after leaving with the product. If the customer had received the item via delivery (thus being unable to view the physical item beforehand), we could discuss a full refund.

"However in his case, he left without expressing his discontent."

Plush Lovers said that Teron then "went ahead to threaten to post on Stomp and social media" even after they tried to explain why his case did not warrant a refund.

"He then said that we could re-discuss if we didn't want the issue to blow up. After multiple times of asking him to go ahead with whatever he deems fit, he still continued to threaten," according to Plush Lovers.

"When we ended the conversation, he went on to post defamatory comments on all our posts and created a new Instagram account just to flame us as well. All because we strongly believe that his case did not warrant a refund."

In a statement on Facebook, Plush Lovers addressed all customers and said it would like to "offer a sincere apology regarding the Valentine’s Day fiasco".

"It is with deepest regret that we were unable to produce and/or deliver all items as per promised. We do understand that we caused many of you to be left without flowers on this important day.," it wrote on Feb 16.

Plush Lovers said it had experienced a "logistical debacle" on the eve of Valentine's Day on top of being affected by manpower shortages due to the recent coronavirus outbreak.

"We were working around the clock and tried our utmost best to fulfil as much orders as we physically could," it added.

Besides offering a refund to customers with undelivered orders, Plush Lovers also asked for "a chance to make up for this" and said it would be responding to everyone individually.

Appealing for support and kind understanding, Plush Lovers said: "A mistake has been made. We are trying to rectify the issue, and ensure that this will never be repeated. At a time as such, negativity will not lead to any good outcome."

View more photos for the two cases in the gallery.

Related Stories
After hurling F-word, Floral Garage shuts down another customer who received rotting roses
Florist company and customer hurl F-word at each other after complaint over $74.50 bouquet
Woman so paiseh by $84.90 bouquet with "mahjong paper" and rubber band that she had to hide it
More About:
Valentine's Day
Valentines
bad service
rude