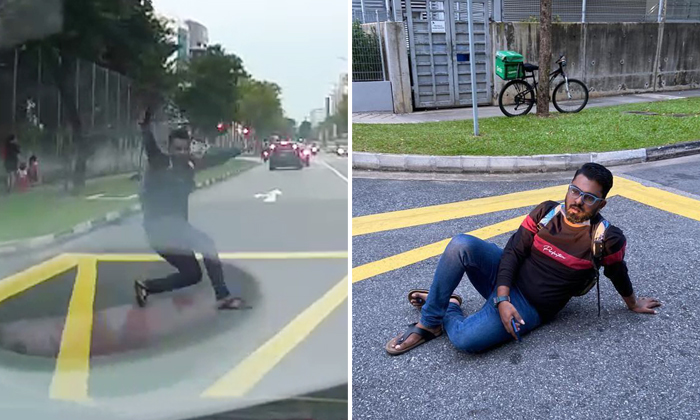 What a dramatic accident — except that there was no collision involved.

A man was caught on camera throwing himself out in front of an oncoming car and then falling onto the ground even though the vehicle did not hit him.

Several readers alerted Stomp to the video that has been circulating online since Wednesday (Sept 28).

In the video, the pedestrian is seen flinging himself onto the road in an exaggerated tumble.

The driver who captured the video, however, had honked and stopped in time while still some distance away from the man. She can be heard saying, "What are you doing?"

It is unclear what the man replied but he continued to sit on the road.

Many netizens called out the incident for being a "100% insurance scam" and made sarcastic comments about the man's acting.

One user said, "This fella deserves an Oscar Award," while another another added, "Drama king".

Several also urged the driver to make a police report.

Well, the man won't be winning any lead roles soon, but perhaps he can consider a career as a stuntsman.

Related Stories
Pedestrian tumbles to the ground not once but twice -- even though car hasn't touched him
Woman runs across road and towards car, crouches down -- then suddenly changes her mind
Man behind 'Oscar-worthy' Farmway incident was an accountant, earned over S$10K monthly
More About:
near-miss
near-accident
scam
pedestrian
funny