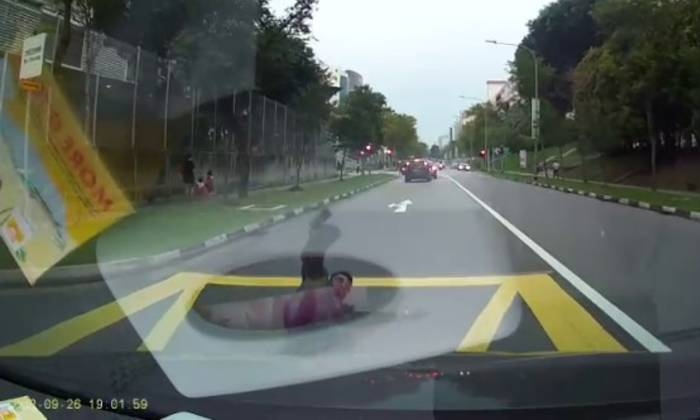 A 29-year-old man is being investigated by police for a rash act after a video of him flinging himself in front of an oncoming vehicle went viral last week.

Through investigations, officers from Ang Mo Kio Police Division established the identity of the man.

Preliminary investigations revealed that the man did not suffer any injuries from the incident, did not ask the woman for any money and had walked off after the incident.

In the video, the man is seen flinging himself onto the road in an exaggerated tumble.

The driver who captured the video, however, had honked and stopped in time while still some distance away from the man. She can be heard saying, "What are you doing?"

Many netizens called out the incident for being a "100% insurance scam" and made sarcastic comments about the man's acting.

If convicted, the offence of rash act carries an imprisonment term of up to six months, a fine of up to $2,500, or both.

The police said they have zero tolerance against acts that endanger the lives or safety of others and will not hesitate to take action against those who endanger public safety.

Related Stories
Man flings himself onto road in Serangoon before car even goes near him
Pedestrian tumbles to the ground not once but twice -- even though car hasn't touched him
Man puts foot under taxi, flees after witness says 'jangan tipu' and offers to show video to police
More About:
near-miss
near-accident
scam
pedestrian
police
investigation