Man behind 'Oscar-worthy' Farmway incident was an accountant, earned over S$10K monthly 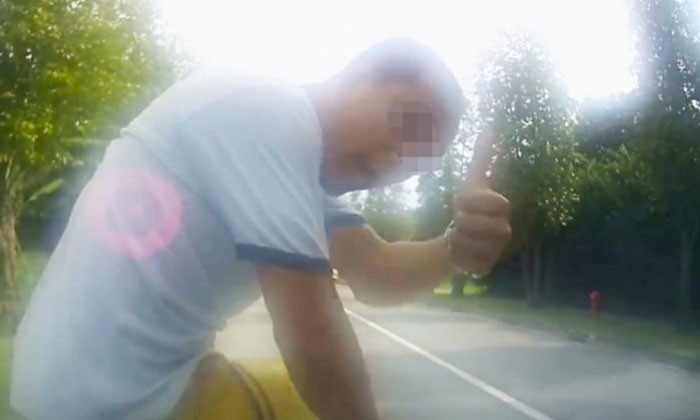 The man who was involved in a accident scam at Pasir Ris Faraway is revealed to have been a bank accountant, earning more than S$10,000 a month, until he unexpectedly lost his job at the start of 2017, and lost his entire fortune on stocks.

Stomp reported about the ‘accident’ which happened on Jun 11 in an earlier story.

Facebook user Terry Loo Peng Leong was driving down Pasir Ris Farmway 2 on Jun 11, when a man suddenly started running towards him and threw himself on the bonnet of his car, reports Shin Min Daily News via Lianhe Zaobao.

The man then asked Terry for S$300, but was arrested when Terry called the police.
When reporters interviewed the father of the accused, he revealed that his son had worked in a bank as an accountant, and fetched more than S$10,000 a month.

Said the elderly man in his seventies:

“However, at the end of 2016, he (my son) started bleeding money when his investments failed.

“He was declared bankrupt in Sep 2016 and even lost his job, severely affecting his life and mental state.“
He further told reporters that after the chain of events, his son was always thinking of how he could ‘regain his former glory’.

The accused also worked as a deliveryman from March 2017 for a unspecified period of time.

The desperate father said that his son’s condition would fluctuate, and would just behave like any normal person if not subjected to stress.

“My family and I are helpless.

“We only hope that he’ll be safe and recover soon.”

According to him, his son had told him that he was going out to look for pets, but had somehow gotten drunk before getting into an ‘accident’ on Pasir Ris Farmway 2.

He added that his son is currently awaiting results for his psychiatric evaluation, and promised to be more vigilant in the future so as to not let his son commit the same mistake.

It is understood that Terry does not intent to pursue the matter legally and the accused’s father had called him to apologise for his son’s actions.