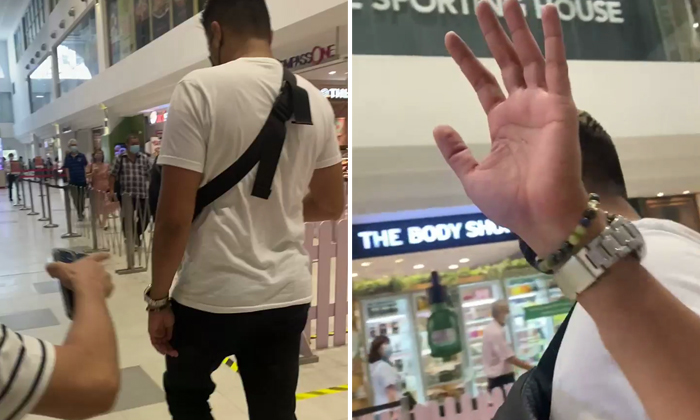 Voyeurism at Compass One: Man, 36, who allegedly took upskirt video of woman arrested

Police are investigating a case of voyeurism in which a man allegedly took an upskirt video of a woman at Compass One shopping mall on Monday afternoon (June 7).

A passer-by had apparently caught the man in the act and posted a Facebook video of him trying to confront the perpetrator.

In the eight-second video, the passer-by can be seen trying to catch up with the man, who attempts to block his face with his hand and then walks off.

The passer-by said he had witnessed the "upskirt incident" while going on an escalator that was going up from Basement 1 to Level 1.

He shared on Facebook: "The man in this photo and video was filming the lady in front of him. I witnessed him filming and he was looking around to make sure that nobody was watching him.

"Unfortunately for him, I caught him in the act. He was using his front camera to film the lady and I saw the footage on his screen.

"He knew that I caught him as he looked into my eyes for a couple of seconds.

"I then confronted him and he strongly denied any wrongdoing."

According to the passer-by, the man was asked why he was trying to flee if he had not done anything wrong. However, the man insisted that he was not trying to run away.

"Poor lady wasn’t aware what was going on and look shocked when I told her she was being filmed," the passer-by added.

"Regretfully, we forgot to take down the lady’s details as we tried to chase the man down."

The passer-by also said it was "unfortunate" that nobody came forward to help him stop the man despite him shouting.

He then called the police, but lost track of the man, who "started taking off running towards Sengkang Bus Interchange".

In his post, the passer-by shared a description of both the man and the woman. He also appealed for the woman to come forward as "it will be crucial in the process of bringing this man to justice".

In response to a Stomp query, the police said they were alerted to a case of voyeurism at 1 Sengkang Square at 4.49pm.