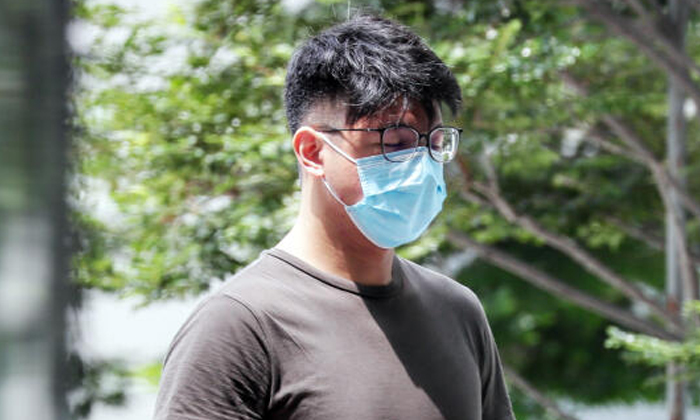 An engineer who took upskirt videos claimed he wanted to test his phone camera after finding that such videos online were of varying qualities.

Abel Tan Yew Hong, 28, took upskirt videos of 10 women from July 24 to Sept 10 in 2019 at various locations, including Bedok and Serangoon MRT stations, and Suntec City.

The product development engineer was jailed for 11 weeks on Friday (April 16).

He pleaded guilty to three counts of insulting the modesty of a woman, with another seven similar charges taken into consideration during sentencing.

On many occasions, Tan followed his victims on escalators, standing behind them and using his Sony Xperia mobile phone to record the videos.

In one instance at Serangoon MRT station on Sept 5, 2019, he had followed his victim up three escalators to take a video.

But he was caught five days later after filming another video at Bedok MRT station.

A man had seen Tan taking the video at about 7pm and stopped him, taking him to the MRT staff, who called the police.

Tan's offences came to light when his phone was seized and examined.

On Friday, Deputy Public Prosecutor Goh Qi Shuen urged the court to jail him for 11 weeks.

But Tan's lawyer, Mr Marshall Lim, asked the court for a sentence of 10 weeks instead.

Mr Lim told the court that Tan graduated from a local university and also completed his master's degree, and was working for a major international semiconductor company.

"To satisfy his curiosity as to why there was such a variance in the quality of the videos, our client instructs us that he took the unfortunate decision to try taking these videos for himself," said Mr Lim.

"His intention was merely to experiment and to find out if his cellphone camera could take the high-quality videos he saw on the Internet."

Tan is also in a relationship with his long-time girlfriend from junior college, who was disappointed but has forgiven him.

"She continues to stand by him and their plans to get married have not changed," said Mr Lim.

District Judge Adam Nakhoda said he agreed with the prosecution on the sentence.

"The accused was somewhat persistent in following victims up the escalators," he said.

The judge also allowed the accused to defer serving his sentence so that he could settle his personal affairs.

For each count of insulting the modesty of a woman, he could have been jailed for up to a year, or fined, or both.

Related Stories
Man who took upskirt videos of classmate caught while reviewing one on train
NYP student who took upskirt video of woman was a 'loner' and under 'severe stress': Lawyer
NParks officer charged with corruption, cheating and taking upskirt photos of multiple women
More About:
upskirt
court