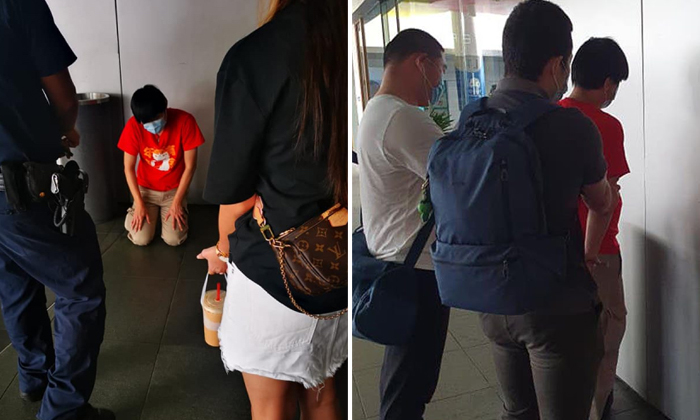 A 37-year-old man was arrested for voyeurism after he was allegedly caught taking upskirt shots of a woman at VivoCity on Friday morning (May 7).

Facebook user Wu Xiaofang, the victim, said the incident occurred while she was on an escalator at Exit C of the shopping mall at around 8.18am.

Wu said that she did not notice the suspect, who was in a red shirt, until another man came forward and patted her on the shoulder.

Wu recounted: "He asked if I knew the guy in red behind me. I said I didn't."

The man then grabbed onto the suspect, who attempted to flee. Two other male passers-by stepped forward to help and the suspect was eventually subdued.

The three men stayed at the scene to ensure that the suspect did not try to escape and only left after the police arrived.

Wu said she is unsure if the three men would see her Facebook post, but sincerely thanked them for their help. Her post has since been removed.

In response to a Stomp query, the police said they received a call for assistance at 1 Harbourfront Walk at 8.20am.

A 37-year-old man was subsequently arrested for voyeurism.

According to Lianhe Wanbao, the suspect knelt down to beg for mercy after getting caught. He also put his hands on his knees and bowed his head while looking remorseful.

However, Wu was unconvinced.