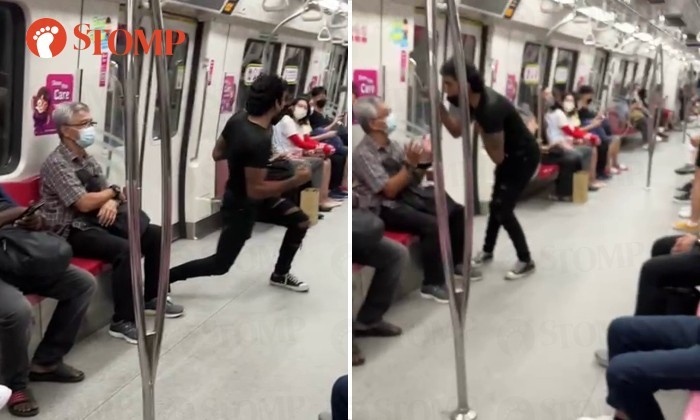 A man browbeat another into saying "I am a coward" on the MRT train on Friday (Aug 5).

Sharing a video of the incident, a Stomper said the incident happened between the Paya Lebar and Kembangan MRT stations at 11.11pm.

The Stomper recounted: "This black-shirt guy started scolding this uncle for staring at him and asked the uncle to get down from the train and have a fight with him."

According to the Stomper, the man verbally abused the uncle with obscenities such as "Who the f*** are you to stare at me?", "My c*** is bigger than yours" and "You're worse than my pubic hair."

The Stomper said: "One of the passengers, a man was trying to stop the black-shirt him and said, 'He is your father’s age. Don’t talk like that. Please calm down.'

"The black-shirt guy said, 'You don’t even know my father and don’t talk to me if you don’t know me.'

"And he continued to bully the uncle."

In the video, the black-shirt man, who was standing, can be heard saying to the seated uncle: "Tell them you're a coward."

The uncle immediately turned to the other passengers, put up his hands and said: "I'm a coward."

The black-shirt man punched the air and exclaimed: "Yeah!"

He looked around at the other passengers, who did not react much, and then he turned to the uncle and said: "Tell them, come on, come on, some more, some more."

When the black-shirt man tried to get the uncle to "say some more", the uncle shook his head and said: "It's okay, it's okay."

The video ended there.

The Stomper said: "I don’t think the black-shirt guy would even dare to say such things, but he knew this uncle wouldn’t dare to fight him, so he just went all the way and bullied the uncle."

Related Stories
Woman allegedly gets body-slammed in dispute with trio on train, police looking into matter
Man scolds commuter for 'touching his backside' and gives 'kay pohs' a tongue-lashing
Man argues with worker over MRT seat: 'You come here work, you go, give people sit down'
More About:
MRT train
bully
MRT
train