Woman allegedly gets body-slammed in dispute with trio on train, police looking into matter 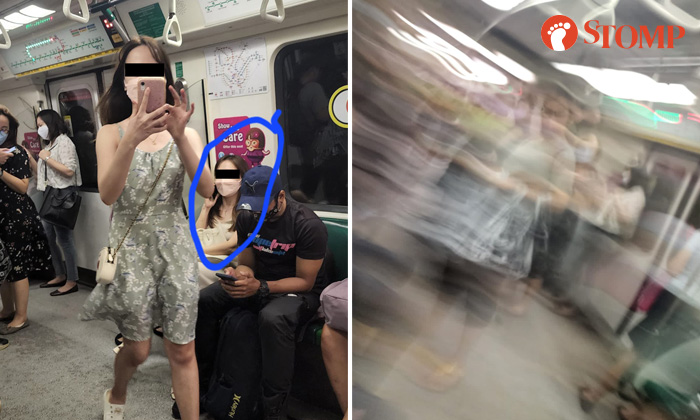 The police are looking into a dispute that occurred between a woman and a family of three on a train on Thursday evening (July 21).

Stomper Anonymous said the "horrible experience" occurred on the North-South Line towards Jurong East when she was on her way home at around 7.15pm.

She alleged: "I was physically assaulted by this family.

"The woman, whom I circled in the picture, was the mother seated beside me. I had fallen asleep and nodded off on the train. I could have accidentally leaned on her, I'm not sure, but I was woken up by a very hard shove on my left arm.

"I told the woman that if she shoved me again, I would shove her back. She then called out to her husband, who was seated at the reserved seat, to exchange seats with her and to sit beside me instead.

"Just then, the daughter pulled out her phone and started filming and walking towards me.

"In self-defence, I took out my phone and stood up too. The man sitting beside me, whom I believe is her father, then stood up and used his body to body-slam me, to prevent me from filming his daughter and thereby trying to knock my phone out of my hands.

"He fell in the process as the train jerked. However, he got up and came at me again. This time, he pulled his mask down and stuck out his tongue very close to my face.

"He did not say anything to me, just that it was disgusting, perverse and very unhygienic of a big-sized man to come at me like that.

"I did not appreciate him body-slamming me. When he did that, the whole row of passengers vacated their seats and only one Indian lady was kind enough to come from behind him to prevent him from further attacking me.

"After that, the family alighted at either Toa Payoh or Braddell station.

"I'm very upset they had the audacity to do that, especially the father who body-slammed me. The girl had also taken a video of me without my consent.

"What should I do? Never have I felt so violated and disgusted. This family was ungracious, rude, perverse and disgusting."

The Stomper said she lodged a police report on the same day.

Related Stories
Man scolds commuter for 'touching his backside' and gives 'kay pohs' a tongue-lashing
Man argues with worker over MRT seat: 'You come here work, you go, give people sit down'
Couple slammed for bringing non-foldable bicycle on MRT: 'Is it their grandfather's train?'
More About:
dispute
train
MRT
assault
police