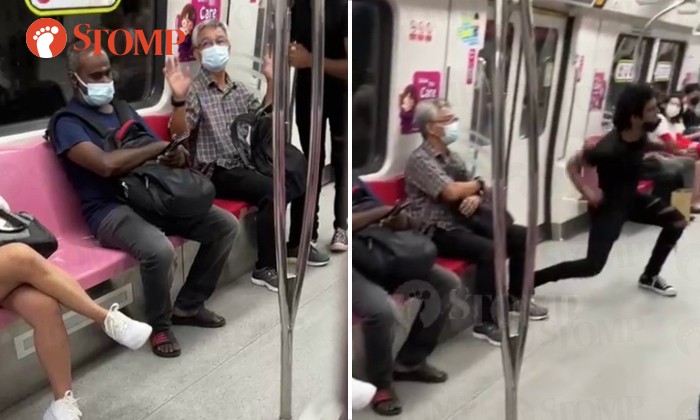 An 18-year-old man, who made an MRT passenger say "I'm a coward", was charged with public nuisance in court on Saturday (Aug 13).

The incident took place between the Paya Lebar and Kembangan MRT stations on Aug 5 at 11.11pm, said a Stomper who shared a video of what happened.

The video shows Ezra, who is standing and dressed in black, harassing a seated Mr Ismail.

The Stomper recounted: "This black-shirt guy started scolding this uncle for staring at him and asked the uncle to get down from the train and have a fight with him."

According to the Stomper, the man verbally abused the uncle with obscenities such as "Who the f*** are you to stare at me?", "My c*** is bigger than yours" and "You're worse than my pubic hair."

In the video, Ezra can be heard saying to Mr Ismail: "Tell them you're a coward."

Mr Ismail immediately turned to the other passengers, put up his hands and said: "I'm a coward."

Ezra then punched the air and exclaimed: "Yeah!"

In a statement on Saturday (Aug 13), the police said that they received a report that a man was allegedly causing a commotion on the MRT train on Aug 5 at about 11.10pm.

"Upon receiving the '999' call, police officers from the Public Transport Security Command were dispatched to render assistance at Bedok MRT station. However, the man involved was no longer at the scene," said police.

"Police officers from Bedok Police Division worked with officers from the Public Transport Security Command to identify the man. He was subsequently arrested for the offence of public nuisance."

Anyone found guilty of the offence of public nuisance under Section 290 of the Penal Code 1871 will be liable for a fine which may extend to $2,000.