Man argues with worker over MRT seat: 'You come here work, you go, give people sit down' 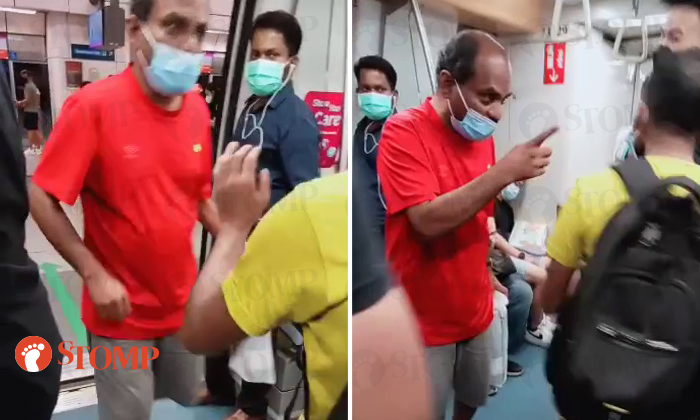 A heated argument broke out between two men on an MRT train on Saturday afternoon (Mar 19).

Stomper Anonymous witnessed the incident onboard the North-East Line at around 3pm and shared videos of the dispute.

According to the Stomper, an older man and a younger worker had been quarrelling over a reserved seat.

A video shows the man scolding the worker from outside the train, "You come here work, you go, give people sit down" and "You don't come shout to me ok, who are you?"

Meanwhile, the worker, who is inside the train, can be heard repeatedly telling the man to, "Go, go, go" and retorting, "Who are you?"

This angers the man, who steps into the train to chide the worker for scolding him with "vulgar words".

The worker is heard asking, "Singaporean, so what?" but the man continues to reprimand him for using vulgarities.

The man also says, "Eh, you stress (in) your country ah, don't come to me, ok?" and repeatedly asks the worker why he used the F-bomb.

The man adds, "Never say sorry also" and "my mother father also never scold me, who are you?"

"I'm not high, you high already. Go, go, go, go. You go this way, I go this way. You cannot play catching with me," says the man before he alights from the train.

However, both men continue to argue at the MRT station after exiting the train.

A second video shows the worker shouting, "Don't touch me like that, understand?"

Anonymous told Stomp: "I don't know who is in the right. Both seem to be in the wrong. But I think it is quite unnecessary to pick a fight on public transport.

"Also, the question is, 'Does being Singaporean give you a right to intimidate foreigners over small incidents like reserved seats?'

"The matter should have been put to rest since the worker had already gotten up to stand on the train. Why go after the worker to bully and threaten him? He seemed exhausted and just wanted to rest.

"However, the worker should not have used the F-word to instigate the man either.

"Luckily, there were no pregnant women or old ladies standing around as we all had to move around to stay away from the fight.

"We should now all have matured as a society to be able to assimilate. This dispute was just unnecessary and really dangerous for other train passengers."

Related Stories
2 couples exit cars to argue at Clementi carpark
Commuter shouts at man on MRT train that he has 'agenda' and is 'a message from a god'
Elderly man hurls vulgarities at bus driver for not stopping for him: 'Do you know who am I?'
More About:
dispute
argument
MRT
train