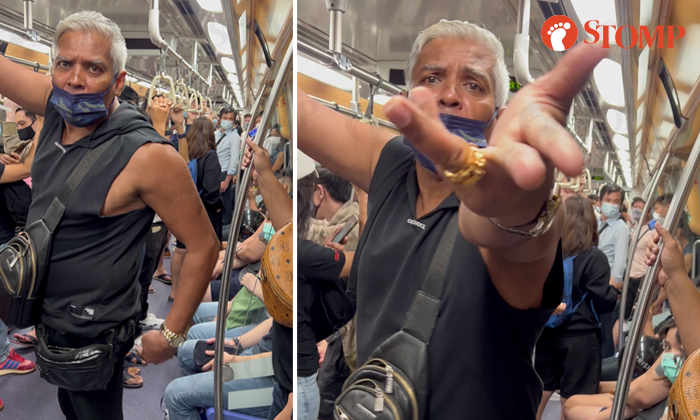 A man exploded in anger after a fellow commuter apparently brushed against him on a train and admonished those who tried to intervene.

The incident occurred on the North-East Line on Sunday (June 5), at around 8.45pm.

Videos of the man's tirade by taken by Stomper YC and another commuter, which were then sent to Stomp.

YC said: "This 'excuse me bully' suddenly started shouting at another passenger. He accused the passenger of touching his backside and not saying 'excuse me' while moving further into the train."

In the video, the man can be seen scolding a younger commuter for supposedly touching his buttocks while walking past him.

When someone, who was recording the incident, tried to intervene, the man turned around and yelled, 'Eh f*** you!" He then repeatedly asked, "Who are you?" and said he was not worried about being filmed.

He also said, "I got my right to ask people not to touch my backside!" and "Don't be kay poh... You kay poh! Not your problem! Now I'm telling you it's not your problem."

Other commuters in the background were met with equal hostility when they tried to intervene.

When another person told the man that the train was a public space, the man responded, "Public your father place ah? Can touch backside and go in ah?"

Someone is later heard making a call for assistance about the "rowdy passenger here", to which the man replied, "You are rowdy lah, you are nobody lah," before alighting at Boon Keng MRT station.

YC told Stomp: "Both the other video-taker and myself reported the matter to train staff. We shared our videos with the station manager at Potong Pasir MRT station.

"The station manager said he would report it to the police and took down our details as the police might reach out to us for statements.

"I didn’t post these videos on social media to avoid unnecessary attention."

Related Stories
Van driver and passenger shout and hurl vulgarities at lorry driver for not signalling along CTE
Woman shouts at screener at City Square Mall, calls her "old b***h"
Man with 'knee problem' scolds commuter who told him not to put feet up on bus seat
More About:
dispute
argument
MRT
train
rude