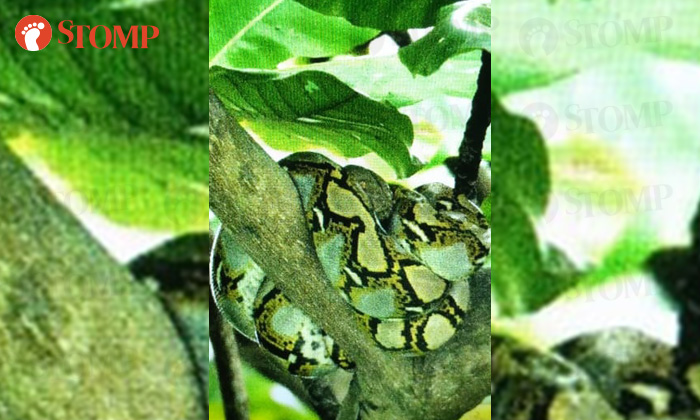 Stomper Ben Lee managed to snap a picture of a reticulated python yesterday (Sep 16) at 4.50 pm at the Sungei Buloh Wetland Reserves.

Ben, the founder of Nature Trekker, a nature conservation organisation, was excited to see the python in the tree.

In his 20 years of visiting the park, this is only the second time he has seen one.

"I was holding my professional binoculars looking at a bird. It flew to another tree and I spotted the familiar patterns of a snake. That's when I knew I spotted a python."

According to The Guinness World Records, the Reticulated Python (Python reticulatus) is the world's longest snake.

These pythons are much longer than the famous South American Anaconda and have an estimated length ranging from 1.5 metres to 6.5 metres.

"I thought it was quite interesting seeing a python in nature. They are actually usually found in urban areas of Singapore, such as nearby people's houses to catch rats or in toilets or drains," Ben added.